What is a Bomb Calorimeter?

The bomb calorimeter is an instrument used to measure the heat of reaction at a fixed volume and the measured heat which is called the change of internal energy (ΔE). In chemistry, the changes of heat of a reaction can be measured at fixed pressure or volume.

The bomb calorimeter is a laboratory instrument used to measure the amount of a sample’s combustion heat or heat power when excess oxygen combustion occurs. The purpose of this research is to determine the effect of using the bomb calorimeter on the ability of physics students to process science. Influences involve the efficacy of using the devices and learning how to develop the abilities of the scientific method of students before and after using materials.

If the heat of the capacity calorimeter Ccal of to the calorimeter is known, then one determines the heat generated by a only needs to note the change in the temperature process. Calorimetry is widely used in present-day laboratories. 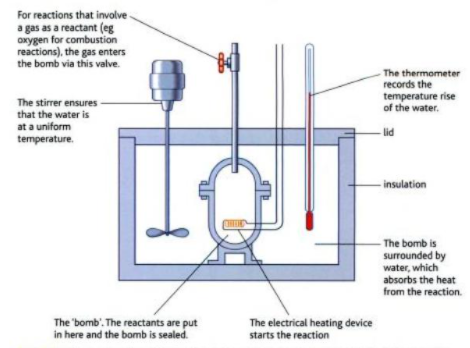 The bomb calorimeter is used to determine the calorific values of solid and liquid fuels. It consists of a strong steel shell known as a bomb.

It consists of a base which supports the platinum crucible and is screwed to the body of the bomb. The top of the bomb carries an oxygen supply connection and a valve to release the product. One gram of powdered sample coal is taken for the test and the calorimeter is filled with 2000cm3 of water. The sample is placed in the platinum crucible. The iron fuse wire which surrounds the sample of coal, is connected to the lower end of the two electrodes. The electrodes extend through the base of the bomb and connect the fuse wire to an electric circuit. The coal can be ignited by closing the electric circuit.

A bomb calorimeter is an instrument used to determine the heat emitted from a given quantity of biomass sample combustion and to calculate the HHV of that biomass fuel. Approximately one gramme of sample fuel is ground and diluted after each test to fit into a capsule for bomb combustion. The emitted heat increases the temperature of the water covering the bomb by combusting the fuel. The total heat of the fuel is determined by increasing the temperature and the real mass of the fuel.

In different industries and academic environments, calorimeters are helpful, and an industrial pilot plant may use a DSC to assess a shift in the formula of a substance and how it impacts the formula itself. To calculate the amount of heat (calories) in food, oxygen bomb calorimeters are useful in food testing laboratories.

What is the principle of bomb calorimeter?

Combustion Calorimeters calculate the heat that a combustible solid-liquid material emits. This is achieved by measuring into a crucible an exact amount of the sample material, putting the crucible inside a “bomb” (a enclosed metal container called a pipe), filling the oxygen pipe and igniting the material.

Why is a bomb calorimeter more accurate?

What does a bomb calorimeter determine in a food sample?

A bomb calorimeter is used to measure, under controlled conditions, the heat emitted by a sample burned under an oxygen atmosphere in a closed vessel (bomb) surrounded by water. The consequence of the calculation is called the amount of combustion, calorification, or BTU.

How do we use a calorimeter?

In their science project tests, many students use calorimeters when they need to measure heat potential or the basic heat of a material. In general, a calorimeter is used to determine the sum of heat energy and then uses it to quantify the precise heat of a material or other details related to heat.

What are the necessary features of a calorimeter?

Basically, a bomb calorimeter consists of a small sample cup, oxygen, a stainless steel bomb, water, a stirrer, a thermometer, a dewar or an insulating bottle (to avoid heat transfer to the atmosphere from the calorimeter) and a bomb-connected ignition circuit.