Carbene is a molecule having two unshared valence electrons and a neutral carbon atom with a valence of two. Depending on their electrical structure, carbenes are classed as singlets or triplets.

Carbenes are neutral substances with just six valence electrons on the carbon atom. 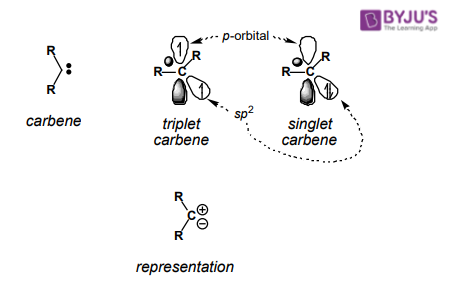 Triplet carbenes have 8 kcal/mol (33 kJ/mol) lower energy than singlet carbenes for simple hydrocarbons (see also Hund’s law of maximum multiplicity), hence triplet is the more stable state (the ground state), and singlet is the excited state species. The singlet state can be stabilised by substituents that can donate electron pairs by delocalizing the pair into an empty p-orbital. The energy of the singlet state can be lowered to the point where it becomes the ground state. There are currently no feasible solutions for triplet stabilisation.

Carbenes are most often made from diazoalkanes using photolytic, thermal, or transition metal-catalysed methods. Rhodium and copper are commonly used in catalysts. In aprotic solvents, the Bamford-Stevens reaction produces carbenes, while in protic solvents, carbenium ions.

When diazomethane is heated, nitrogen gas is released, resulting in the formation of carbene. Carbene precursors are commonly made from diazo compounds. Historically, catalysts such as dirhodium, copper, and iron were utilised to breakdown diazo compounds and produce the essential metal carbene intermediates. Gold catalysts have recently been created as a novel form of metal catalyst for the decomposition of diazo compounds.

In the presence of a strong base, the carbene is sometimes produced through an unique “alpha”-elimination. Alkyllithium reagents, such as CH3Li, are commonly used as strong bases, however KOH can also be used with some compounds.

What are carbenes used for?

Carbenes are made up of unusual carbon atoms and are usually unstable in nature. They attach themselves to metals to form metal-carbene complexes that serve as efficient catalysts used widely in the pharmaceutical industry.

How are carbenes formed?

The formation of carbenes by way of electrically charged, or ionic, intermediates is exemplified by the reaction of chloroform with a strong base, potassium tert-butoxide. In the first step of this reaction, a proton or hydrogen ion (H+) is removed from the chloroform molecule in a normal acid–base reaction.

What are some examples of carbenes?

Carbenes are classified as either singlets or triplets, depending upon their electronic structure. Most carbenes are very short lived, although persistent carbenes are known. One well-studied carbene is dichlorocarbene Cl2C:, which can be generated in situ from chloroform and a strong base.

What are singlet & triplet carbenes?

A carbene is a neutral divalent carbon species containing two electrons that are not shared with other atoms. In the ground state, a singlet carbene has a pair of electrons in a single orbital, whereas the triplet has two unpaired electrons, each occupying a separate orbital.

What is a carbene transfer reaction?