Dimethylglyoxime is a white powder with the molecular formula C4H8N2O2.

Dimethylglyoxime is soluble in methanol or in sodium hydroxide solution. It is one of the first selective organic reagents applied in analytical chemistry. 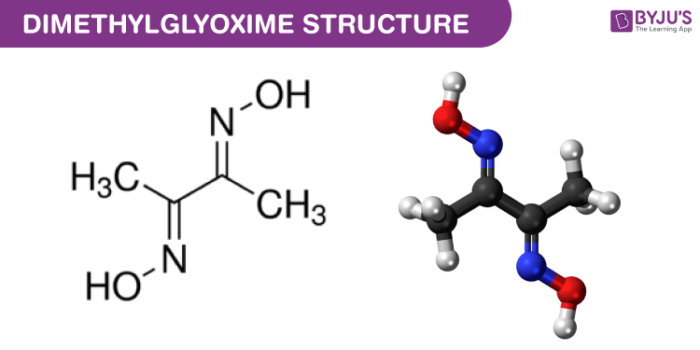 What is Dimethylglyoxime used for?

Why is Dimethylglyoxime insoluble in water?

Ni(DMG)2 is a neutral complex the abbreviation is dmgH2 for neutral form, and dmgH for anionic form, where H stands for hydrogen that is usually insoluble since there are no charges on the compound to bind and solve the ion by polar water molecules.

What type of ligand is DMG?

Dimethylglyoxime (dmg) is a bidentate ligand chelating large amounts of metals. Only two dmg molecules per metal center are needed, because Ni(dmg)22 + has a square-planar geometry. To the aqueous array, add 1 per cent dmg.

What is the role of DMG in analytical chemistry?

Dimethylglyoxime (DMG) is an analytical reagent used from its aqueous solution to precipitate Ni. The method is very effective in terms of selectivity and completeness for Ni recovery but is hardly industrially adopted. The cause is attributed on calcination to the failure of the reagent.

Dimethylglycine (dmg) is a bidentate ligand chelating large amounts of metals. Only two dmg molecules per metal centre are needed because Ni(dmg)22 + has a square-.

Test your Knowledge on Dimethylglyoxime!
Q5