What is the Fischer Esterification Reaction?

The Fischer Esterification Mechanism must include the continuous removal of water from the system or the usage of a large excess of alcohol since the overall reaction is reversible. Fischer Esterification is an organic reaction which is employed to convert carboxylic acids in the presence of excess alcohol and a strong acid catalyst to give an ester as the final product. This ester is formed along with water. A few examples of Fischer Esterification reactions are given below. 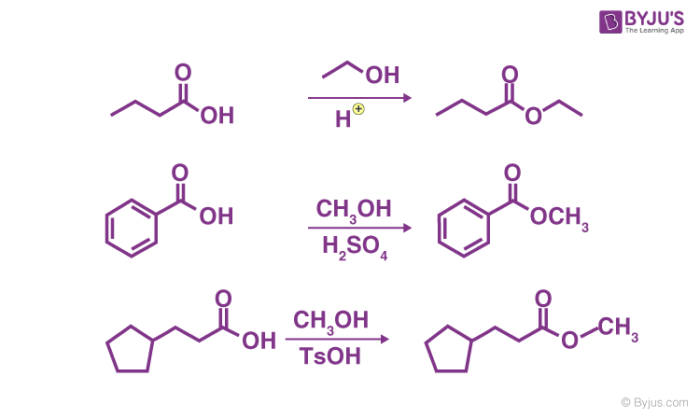 The carbonyl oxygen is protonated by the acid catalyst, activating it toward a nucleophilic attack from the ethanol as illustrated below:

Now, a proton transfer occurs from the oxonium ion to the OH group, giving rise to an activated complex. This can be divided into two further steps where the alcohol first deprotonates the oxonium ion, giving a tetrahedral intermediate after which the OH group accepts the proton from the alcohol. This step can be illustrated as:

Now, the 1,2 elimination of water occurs, giving the protonated ester. A lone pair of oxygen forms a pi bond with the carbon, thereby expelling the water as shown below.

The remaining positively charged oxygen is deprotonated, giving the required ester as a product (as shown below).

Thus, the required ester is produced. The Fischer esterification Mechanism can simply be described as – Protonation of the carbonyl, followed by the nucleophilic attack on the carbonyl, the proton transfer to the OH group, the removal of water and finally the deprotonation step. The reverse reaction of Fischer esterification can employ both acids and bases as catalysts and is referred to as hydrolysis.

1. How does Fischer esterification work?
Ans: If alcohol and an acid catalyst are used to treat a carboxylic acid, an ester (along with water) is formed. This reaction is called the esterification of Fischer. In large excesses, the alcohol is generally used as a solvent.

2. Why is Fischer esterification important?
Ans: The esterification of Fischer is one of the most common carboxylic acid reactions. Treatment with alcohol of carboxylic acids in the presence of an acid catalyst contributes to the formation of esters along with the removal of a water molecule.

5. What is direct esterification?
Ans: Esterification is the reaction of an acid (acid carboxyl group condensation) in the presence of a catalyst with alcohol (alcohol hydroxyl group).