What is Gravimetric Analysis?

Gravimetric analysis is a method in analytical chemistry to determine the quantity of an analyte based on the mass of a solid. Example: Measuring the solids suspended in the water sample – Once a known volume of water is filtered, the collected solids are weighed.

The principle of Gravimetric Analysis:

The principle behind the gravimetric analysis is that the mass of an ion in a pure compound and can be determined. Later, used to find the mass percent of the same ion in a known quantity of an impure compound. 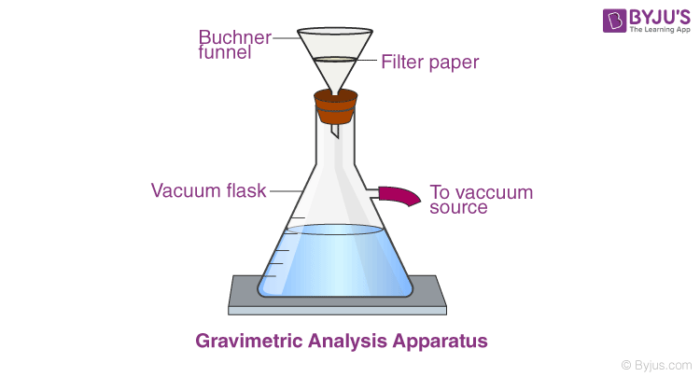 Steps followed in the Gravimetric Analysis

There are 4 fundamental types of gravimetric analysis. Of which, there are 2 common types involving changes in the phase of the analyte to separate it from the rest of a mixture, resulting in a change in mass.

If the methods are followed carefully, it provides exceedingly precise analysis. It is used to determine the atomic masses of many elements to six-figure accuracy. It provides little room for instrumental error and does not require a series of standards for calculation of an unknown.

It usually provides only for the analysis of a single element, or a limited group of elements, at a time. Comparing modern dynamic flash combustion coupled with gas chromatography with traditional combustion analysis.

An ore is analysed for the manganese content by converting the manganese to Mn3O4 and weighing it. If a 1.52g sample yields Mn3O4 weighing 0.126g, what would be the percent Mn3O3 in the sample? The percent of Mn?

What is the principle of gravimetric analysis?

What are the applications of gravimetric analysis?

In analytical chemistry, gravimetric analysis is a way of determining the analyte quantity based on the density of a solid. Example: Measuring the solids suspended in the water sample. The collected solids are weighed until a known water volume is purified.

What is the difference between gravimetric and volumetric analysis?

A gravimetric feeder is a self-calibrating, speed-based dosing device based on weight. On the other hand, a volumetric feeder does this depending on the velocity of volume. Using loss-in-weight technique, which calculates the decreased weight during dosing, weight is estimated.

How does volumetric titration work?

A widely-used quantitative computational methodology is volumetric analysis. This approach requires the calculation of the volume of a solution of known concentration that is used to assess the analyte concentration, as the name suggests. The end point of the titration is the point at which the colour alteration takes place.

What are the advantages of gravimetric analysis?