Properties Of Metals And Non-Metals

We have around 115 different elements known to us. These elements can be found either in a free state or in the combined state in the earth’s crust termed as Metals and Non-metals. The metallic elements are in solid-state; mercury (liquid state) is an exception in this case. We have 11 non-metallic gases, one is liquid (bromine) and rest are in the solid-state. Metals play a very significant role in our day-to-day life. They are widely used in making jewellery, utensils, coins, dyes, drugs etc. Non-metals are used in small quantities but are very vital in daily life. For example, hydrogen is used in the hydrogenation of vegetable oil. 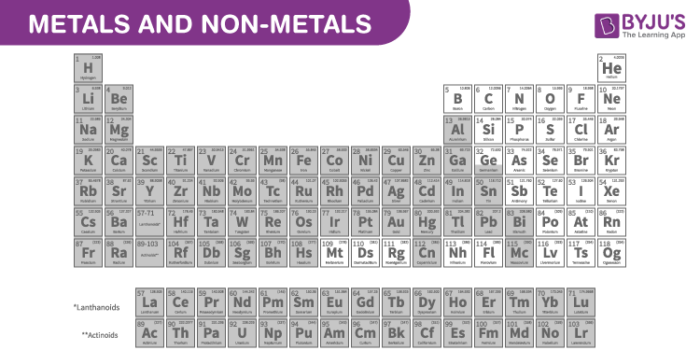 The metals have a lustrous surface; they can also be polished for obtaining a highly reflective surface. Metals are hard and strong in nature. Sodium and potassium are exceptions in this case as they can be cut by a knife. Metallic elements possess high melting and boiling points. They can vaporize too at high temperatures. Their density is also high. The metals are malleable and ductile that is they can be beaten into sheets or drawn into wires. They are excellent conductors of heat and electricity.

On the other hand, non-metallic elements are bad conductors of heat and electricity, except graphite (an isotope of carbon). They are neither malleable nor ductile. Non-metals possess low density and have low melting and boiling points. They are soft solids, except diamond which is the hardest substance known.

Metallic elements generally have 1, 2 or 3 electrons in the outermost shell. Lesser the number of valence electrons more is the activity of the metal. They form cations by losing electrons. The molecule of metals in the vapour state is generally mono atomic. They generally form basic oxides. They ionize by losing electrons hence, they are known as reducing agents.

Non-metallic elements generally have 5, 6 or 7 electrons in their outermost shell. They form anions (negative ions) by gaining electrons to complete their octet. Their molecules are usually polyatomic in the gaseous state. They generally form acidic oxides. Non-metals ionize by the gain of electrons hence, they are known as oxidizing agents.

We have briefly seen the physical and chemical properties of metals and non-metals. For any further query do not hesitate to call the mentor support team at BYJU’S.

Test Your Knowledge On Properties Of Metals And Non Metals!
Q5