What is Sodium Citrate?

Na3C6H5O7 is sodium salt of citrate which has an alkalinizing activity with chemical name Sodium Citrate.

Sodium Citrate is also called Trisodium Citrate or Citrosodine or Natrocitral. It is widely used as a food preservative, for alkalization of urine to prevent kidney stones, an anticoagulant for stored blood, and buffer.

On absorption, Natrocitral dissociates into citrate anions and sodium cations. organic citrate ions are metabolized to bicarbonate ions and result in the buffering of excess hydrogen ion, potentially the reversal of acidosis, an increase in the plasma bicarbonate concentration, and the raising of blood pH. It is trisodium salt of citric acid and dissolves in water. It has a pH value between 7.5 and 9.0. 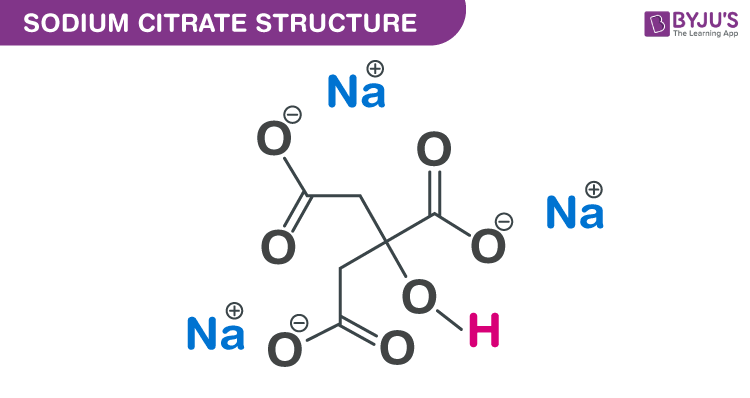 Citrosodine has been verified to be of low concern after conducting various experiments. It is combustible. When inhaled this compound, rest and breath fresh air. When it comes in contact with skin, rinse and wash skin with soap and water. When it accidentally gets into the eyes, rinse with plenty of water. Incase you ingest this compound, rinse your mouth thoroughly.

What is the use of sodium citrate?

Sodium citrate is used to minimize acidity in urine. A less acidic urine helps the kidneys get rid of uric acid, helping to avoid gout and other forms of (urate) kidney stones. This drug can also prevent and treat certain kidney disease-caused metabolic problems (acidosis).

What does sodium citrate do to blood?

Sodium citrate is the ideal anticoagulant for tests of coagulation, which prevents coagulation by forming a calcium ion complex.

What does citrate do in the body?

The medication of sodium citrate is used to make the urine less acidic. This effect helps the kidneys get rid of uric acid and thus helps prevent gout and stones in the kidneys. This drug can also prevent and treat certain kidney disease- metabolic problems (acidosis).

What is the purpose of sodium citrate?

Sodium citrate is the citric acid-based sodium salt. This is often referred to as sour salt, and is primarily used as a food additive, typically for flavor or preservative purposes. It gives both the sour and salty flavours of club soda. It decreases food acidity, so spherification with strongly acidic ingredients is allowed.

What is citric acid used for in food?

Citric acid is a strong organic acid in citrus fruits. This is a natural preservative and is also used in foods and soft drinks to give an acidic (sour) flavour. It is essential in biochemistry as an intermediate in the cycle of citric acid and thus occurs in the metabolism of nearly all living things.

Learn more about the Structure, physical and chemical properties of Na3C6H5O7 from the experts at BYJU’S.

Take up a quiz on sodium citrate
Q5