When two or more elements or compounds mix together, not necessarily in a definite ratio and do not interact chemically, then the resulting substance is known as a mixture. The components of the mixture have their own physical properties. For example a mixture of sand and water maintains the properties of both sand water. There are two types of mixtures: Homogenous and Heterogeneous. A homogenous mixture is a type of mixture in which the components mixed are uniformly distributed throughout the mixture and heterogeneous mixture is a type of mixture in which all the components are unevenly mixed. In this section we shall learn about the separation of mixtures.

Methods of separation of mixtures

The process of separating the inorganic substances present in the mixture or the constituents of the mixture by physical methods is known as separation of mixtures. 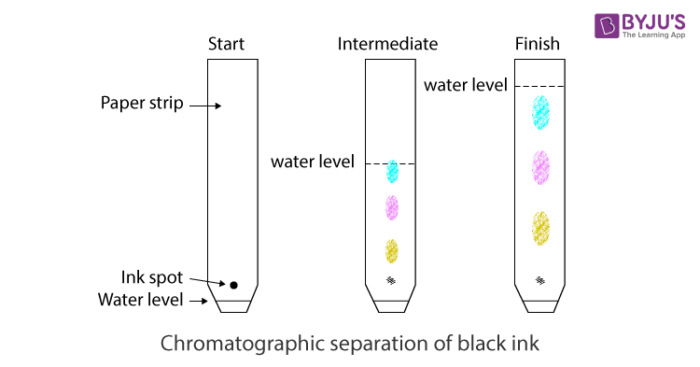 Chromatography is a method used to separate the different components in a liquid mixture. This method is based on the different properties of compounds in two phases: stationary and mobile phase. Based on this, chromatography can be classified into:

Example: Separation of colours in dye

This method is used to separate out tiny solid particles that usually pass through a filter paper and hence the separation of these insoluble particles is carried out with the help of centrifugation. The centrifugation process is based on the shape and size of particles, viscosity of the medium and speed of rotation. With the help of this process we can separate butter from cream. We use an apparatus known as centrifuge and this contains a centrifuge tube holder which contains equal amount of solid-liquid mixture. On rotating the rotor, due to the centrifugal force the denser insoluble particles separate from the liquid and ends up at the bottom of the tube and the liquid gets collected at the top.

Take up a quiz on Separation Of Mixtures
Q5