What is Silicon dioxide?

SiO2 is an oxide of silicon with a chemical name silicon dioxide. It is also called Silica or Kalii bromidum or Silicic oxide or silicic acid. It is widely found in nature as quartz.

It is obtained as a transparent to grey, in its crystalline or amorphous powdered form. It is odourless and tasteless compound. 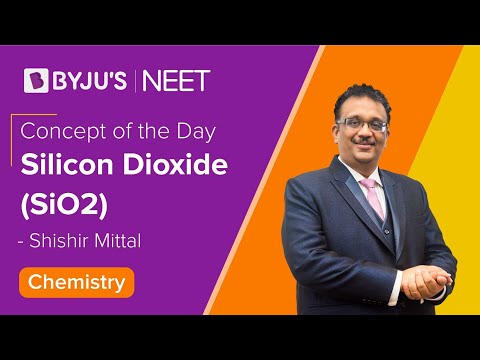 Amorphous silica or precipitated silica is obtained by the acidification of sodium silicate solutions. Silica gel is washed and dehydrated to produce colourless microporous silica. The reaction involving a trisilicate along with sulphuric acid is given below:

Silica when ingested orally is non-toxic. As per a study conducted in the year 2008, found that the higher the levels of silica in water, the risk of dementia decreased. Therefore, the dose was increased to 10 mg/day of silica in drinking water as the risk of dementia decreased. When finely divided crystalline silica dust is inhaled, it can lead to bronchitis, lung cancer, or silicosis, due to the lodging of dust in the lungs. When fine silica particles are inhaled in large enough quantities, it increases the risk of rheumatoid arthritis and lupus.

What are the uses of silicon dioxide?

Approximately 95 per cent of the industrial usage of silicon dioxide (sand) exists in the building industry, e.g. for concrete production (Portland cement concrete). Silica, in the form of sand, is used as the key ingredient for the manufacture of metallic components in engineering and other applications of sand casting. The relatively high melting point of silica allows for its use in these applications.

How is silicon dioxide produced?

Mostly, silicon dioxide is obtained via mining activities including sand extraction, and quartz purification. Quartz is suitable for many purposes, whereas chemical processing is needed to render a more suitable product (e.g. more reactive or fine-grained) purer or otherwise. Silica fume is derived from hot processes such as the processing of ferrosilicon as a by-product.

When orally consumed, silica is essentially non-toxic. However, inhaling finely divided silica crystalline dust may contribute to silicosis, bronchitis, or lung cancer, as the dust becomes trapped in the lungs and constantly irritates the tissue, decreasing lung capacity.

What is the function of silicon dioxide?

Silicon dioxide is also added to many foods and supplements. As a food additive, it serves as an anticaking agent to avoid clumping. In supplements, it’s used to prevent the various powdered ingredients from sticking together.

Is SiO2 linear or tetrahedral?

SiO2 has a linear shape with the two oxygens connected to the Si by double bonds. There are no lone pairs on the Si. This would be an example of sp hybridisation. In polymer form SiO2 is tetrahedral.

Learn more about the Structure, physical and chemical properties of SiO2 from the experts at BYJU’S.