Analysis of metallic elements in compounds or samples is an integral part of chemical research. The purpose of this experiment is to learn the techniques to separate and identify some common cations and to understand the principles for the equilibria of precipitation and complex formation. The systematic analysis of cations is an integral part of the salt analysis (or systematic qualitative analysis).

To identify the cationic radicals present in an inorganic mixture of salts by performing various tests.

Qualitative analysis is the systematic approach that involves precipitation reaction to remove cations sequentially from a mixture. The behaviour of the cations toward a set of common test reagents differs from one cation to another and furnishes the basis for their separation.

These tests do not give conclusive evidence yet they provide some information about the ions present in the mixture.

The cations are classified into the following 5 groups.

Among the common metallic cations only three cations form insoluble chlorides with hydrochloric acid. When 6M of HCl is added to the solution, white precipitates of AgCl, Hg2Cl2 and PbCl2 are formed. Other metallic cations remain in solution.

After the insoluble chlorides are isolated, the pH of the solution is adjusted to 0.5 and then H2S is added. Since the concentration of sulphide ion (s2-) is very low at low pH, only those metallic sulphided having very low Ksp values will precipitate. Cations with larger Ksp values for their sulphides remain in solution.

After isolating the insoluble sulphides in acidic medium, the solution is made basic and the metallic sulphides having larger Ksp values such as ZnS, NiS, CoS and MnS precipitate. Moreover, since the solution is basic Al3+, Fe3+ and Cr3+ form insoluble hydroxides and are also separated from the solution.

These three metallic cations all belong to Group IIA in the periodic table of elements and therefore their chemical properties are very similar. They form soluble chlorides and sulphides and hence are separable from groups 1, 2 and 3 cations. However, their carbonates precipitate in a mixture of ammonium carbonate, ammonium chloride or ammonia solution.

None of the cations in this group form precipitates in the separation processes of group 1-4 cations and thus remain in the final solution.

The flowchart for separating the five groups of cations is given below. 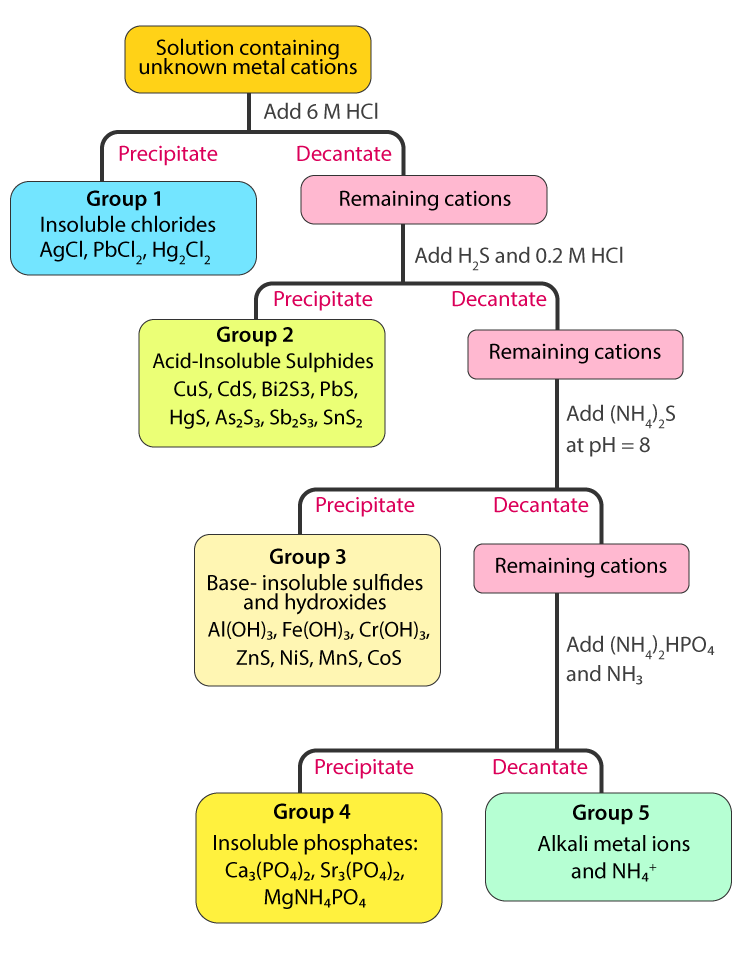 The list of cations comprising the seven groups and the group reagent used for precipitating them out from the solution is tabulated below.

(i) Preliminary Test of Cations

In this test the cations is converted into the metal carbonate in a charcoal cavity which decomposes on heating to metal oxide or even to the metallic state. The cation present can be detected from the colour of the bead or residue left in the cavity or deposit formed outside the cavity called incrustation. 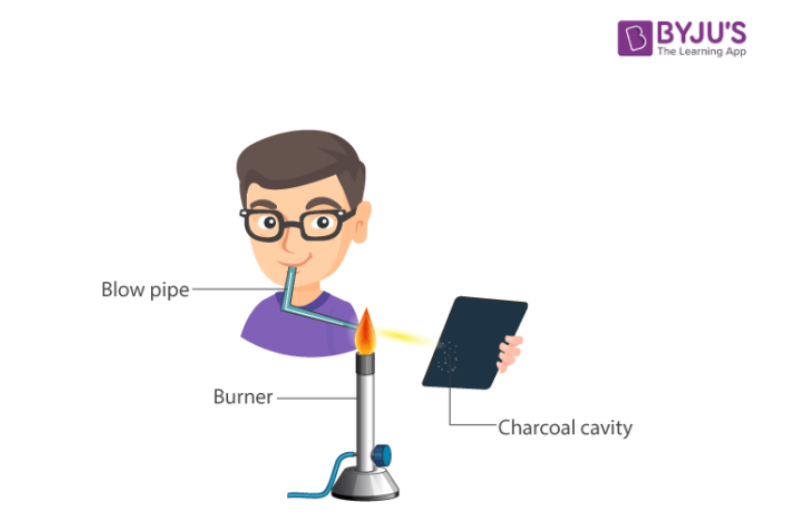 This test is used for the detection of cations in coloured mixtures which may contain copper, nickel, iron or manganese. The borax bead reacts with these metal oxides to form metabolites which have characteristic colour. Some metaborates when heated in reducing flame form lower metaborates or even metals thus causing a change in the colour of bead. 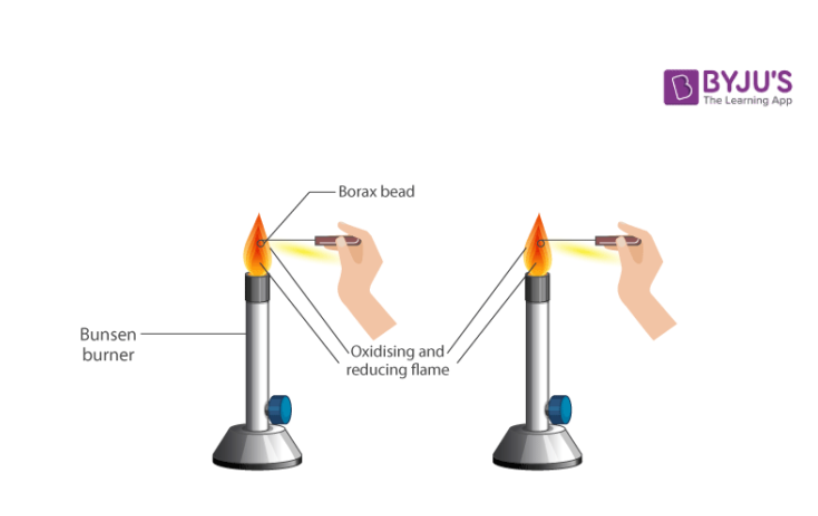 Certain cations like fifth group radicals Ba2+, Sr2+ and Ca2+ in the form of their chlorides impart characteristic colours to the non-luminous flame. The chlorides of these cations are thermally ionised. The ions so formed absorb heat energy and get excited. The extra energy is released in the form of light of the characteristic colour in the visible part of spectrum. Since different metal ions emit light energy of different wavelengths, the colours imparted by the different cations to the flame are also different. Name the group 3 cation which produces a deep red colour.

Name the group 4 cation which obtains a black precipitate.

Name the group 4 cation which obtains a white precipitate.

Test your knowledge on Systematic Analysis Of Cations
Q5