Batteries in Series and Parallel

The battery is a device that consists of one or more electrochemical cells with external connections for powering electrical appliances such as flashlights and mobile phones. Often, people mistakenly consider cell and battery to mean the same. But, it is essential to understand that a cell is a single unit that converts chemical energy into electrical energy, and a battery is a collection of cells.

The function of batteries and capacitors might seem similar as they both store and release electric energy. However, there are a few crucial differences between them that impact their potential applications due to which they function differently. Learn their differences from the link below:

How does a battery work?

All batteries are made of three basic components an anode (the ‘-‘ side), a cathode (the ‘+’ side), and an electrolyte (a substance that chemically reacts with the anode and cathode). When an anode and a cathode is connected to a circuit, a chemical reaction takes place between the anode and the electrolyte. This reaction results in electrons flowing through the circuit and back into the cathode where another chemical reaction takes place. When the material in the cathode or anode is consumed or no longer able to be used in the reaction, the battery is unable to produce electricity.

Batteries in Series and Parallel Connections 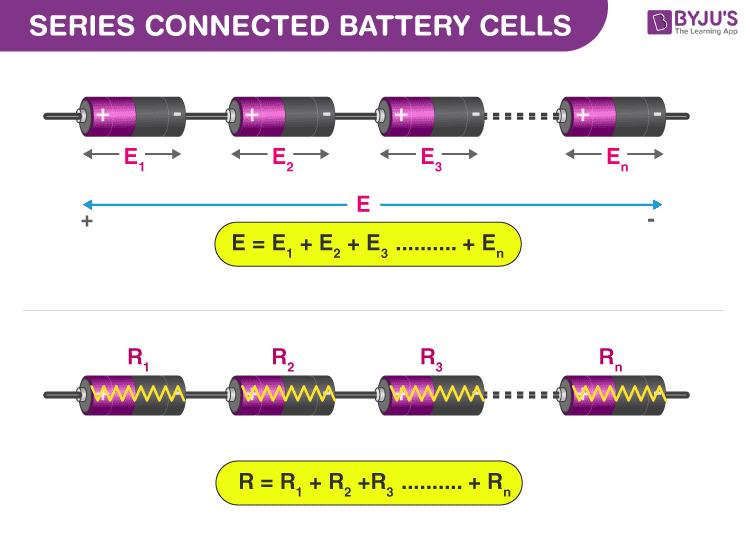 If E is the overall emf of the battery combined by n number of cells, then

A set of batteries are said to be connected in parallel when the positive terminals are connected together in a battery, and similarly, negative terminals of these cells are connected together. These combinations are referred to as parallel batteries. If emf of each cell is identical, then the emf of the battery combined by n numbers of cells connected in parallel is equal to the emf of each cell. The resultant internal resistance of the combination is,

Learn various differences between series and parallel circuits from the link below:

As discussed earlier, batteries can be connected in a mixture of both series and parallel. This combination is referred to as a series-parallel battery. Sometimes the load may require more voltage and current than what an individual battery cell can offer. For achieving the required load voltage, the desired numbers of battery are combined in series to achieve the required current and these series combinations are connected in parallel.

1) What is the internal resistance of a cell of emf 1.5 V that can deliver a maximum current of 3 A?

For maximum current, the load resistance should be 0.

Rearranging the equation, we get

The internal resistance of the cell is 0.5 Ω.

2) List the factors affecting the internal resistance of the cell.

The internal resistance of a cell depends on the following factors:

Test your knowledge on Batteries in series and parallel
Q5