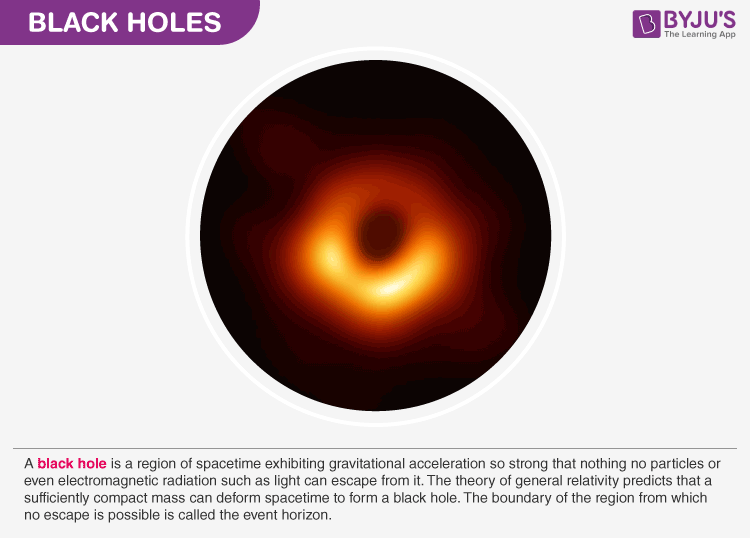 Black holes are one of the strangest things in the Universe. They don’t seem to make any sense at all. It is an enormous amount of matter packed into a minimal area. To better understand, think of a star ten times more massive than the Sun packed into a sphere approximately the size of New York City. This results in a gravitational field so strong that even light can’t escape. Because no light can get out of black holes, they are invisible. It requires a space telescope with special tools to find a black hole. These help us see how stars close to the black hole act differently than the other stars. In this article, let us discuss the black hole in detail.

How Are Black Holes Formed?

A collection of massive hydrogen atoms is what makes a star. In their core, hydrogen atoms fuse into helium, releasing a tremendous amount of energy. The liberated energy, in the form of radiation, pushes against gravity and maintains a delicate balance between the two forces. A star is stable enough as long as there is fusion in the core. In stars, much more massive than the Sun, the heat and pressure at the core allow them to fuse into heavier elements until they form iron. Iron builds up in the centre of the core until it reaches a certain critical point, and suddenly, the balance between radiation and gravity is broken. This results in the core collapsing and imploding into itself. Moving at about the quarter of the speed of light, it feeds even more mass into the core. It is at this very moment that all the heavier elements in the Universe are formed. As the stars die in a supernova explosion, they either turn into a neutron star or a black hole depending on the mass of the star.

There are four types of black holes as follows:

The commonly known way of how a black hole is formed is by stellar death. As stars reach their end-stage of their lives, most will lose mass, will inflate and cool to create a white dwarf. But the largest of these, those ten times or 20 times more massive than the Sun are destined to become either a super-dense neutron star or the stellar-mass black holes.

Can a Black Hole Destroy Earth?

Scientists are using spacecraft and telescopes travelling in space to learn more about black holes. These spacecraft are what help the scientists answer the unanswered questions of the Universe.

Since you are here, you might want to check out the following articles: What is a black hole?

The black hole is a space with an extremely intense gravitational field. Even light cannot escape from the black hole.

What are the types of black holes?

There are four types of black holes:

What would be the radius for a black hole with a mass 10 times as great as that of the Sun.

State true or false: A star turns into a neutron star or a black hole depending on its mass.