In physics, there are many laws that define objects, light, Earth and many more. These laws are formed with respect to some fundamental quantity. Snell’s law, laws of reflection, laws of refraction are some of the laws which are formed on the nature of light. We know that light travels in a straight line and can undergo various phenomenon like diffraction, polarisation, interference, reflection and refraction too.

In this article, let us study a law that defines the intensity of light with respect to distance. Let us learn about the inverse square law.

This law explains the strength of light with respect to the distance of the source.

Inverse square law states that “the Intensity of the radiation is inversely proportional to the square of the distance”.

“The intensity of the light to an observer from a source is inversely proportional to the square of the distance from the observer to the source”.

The below figure explains the source of light and the source distance relationship. 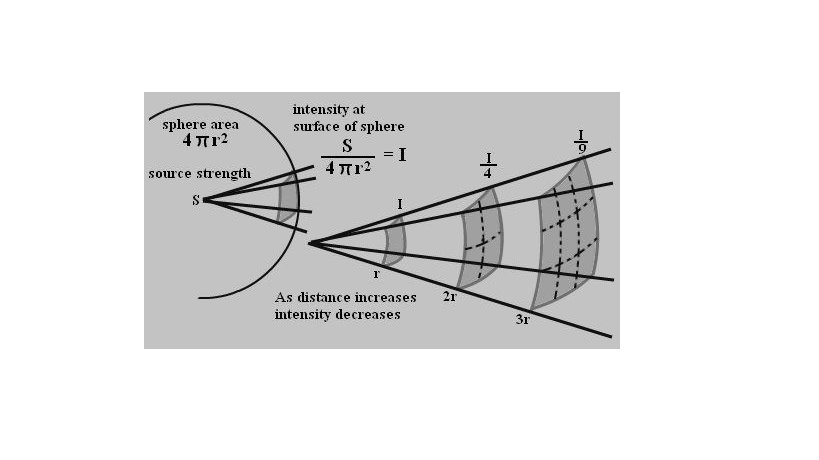 Consider the distance as 2, and when the distance is squared, it results in 4. The inverse of 4 would be ¼. So when we compare, we can note that the resultant is quarter the original power.

The Formula of Inverse-Square Law

d is the distance

I is radiation intensity

Where the intensity of light is measured by candela or Lumen, and the distance is measured in meters.

What is the unit to measure the intensity of light?

Which device is used to calculate the refractive index of liquids by using Snell’s law formula?

When the intensity of monochromatic light is 16:1. Consider d1 is 6 m, what is the second distance (d2)?

What is the inverse-square law formula?

What happens to the brightness of light when moved away from the source?

Stay tuned with BYJU’S for more such interesting articles on physics, chemistry and maths in an engaging way with video explanations.