The Heating Effect Of Current

The heating effect of current can be observed in our day-to-day life. According to the law of conservation of energy, the total energy in a system is always constant. This is the concept we make use of when we use electricity to power a phone or a television or a car. We are converting one form of energy into another.

How does Heating Effect of Current Work?

Have you noticed that when you overuse your phone, it starts becoming warm? This is because when we convert electricity to other forms of energy, some energy is converted to useful work, but a certain amount is converted to heat energy. This is the heating effect of current. This is called Joule heating, ohmic heating, or resistive heating.
This phenomenon was observed by James Prescott Joule in the 19th century. He passed a current-carrying wire through water and noted the rise of the water’s temperature for a span of 30 minutes. He tried different combinations of wire lengths and the amount of current flowing through them. He finally deduced that the heating effect of current is proportional to the current flowing through the wire and the resistance value of the material. This kind of heating does not depend on the direction of the current flow.

The amount of heat generated (H) is given by the following relation.

I is the electric current through the component

R is the resistance

t is the time span of heat generation

Applications of Heating Effect of Current 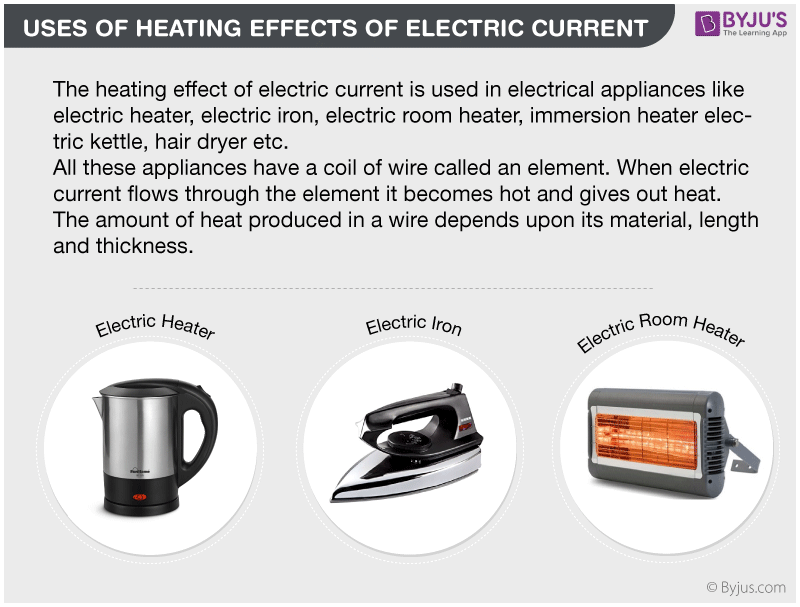 What is the heating effect of current?

When current flows through a conductor, heat energy is generated in the conductor which is known as heating effect of current.

What are the dimensions of a physical quantity?

The heating effect of an electric current depends on three factors:

Rate of flow of electron from one section of the circuit to another.

Give two examples of heating effect of electric current.

(1) Electric Bulb: The filament of the bulb is made of tungsten. It gives light due to the heating effect of the electric current.
(2) Electric iron: It is made of alloys. Alloys have a high melting point.

The different modes of heat transfer are:
Test your knowledge on The Heating Effect Of Current
Q5