Andhra Pradesh board Class 9 Maths Chapter 13, deals with the topic of constructions. In this chapter, students will learn about the steps of drawing the perfect geometrical figures and also writing the justification for it. They will also learn how to extract the needed values and complete the required shape. Some of the topics that are covered in the AP Board Class 9 Maths 13th Chapter Construction are:

In this AP Board 13th Chapter Class 10 Maths students will learn to construct geometrical figures, such as a line segment, an angle, a triangle, a quadrilateral and also some basic constructions justified with proofs.

A construction basically involves drawing shapes, angles and lines in perfection. Geometrical constructions are usually carried out using an ungraduated ruler, compass and a pencil.

The main objective of this chapter is to give the process of necessary logical proofs to all basic constructions. Some of the constructions include;

While the topic is already taught in earlier standards, in class 9 students learn how to construct triangles when special types of measures are given.

Students can check out some of the chapter questions along with their solutions to know more about the concept.

Question 1: Construct an angle of 90° at the initial point of a given ray.

Question 2: Construct the perpendicular bisector of a given line segment. 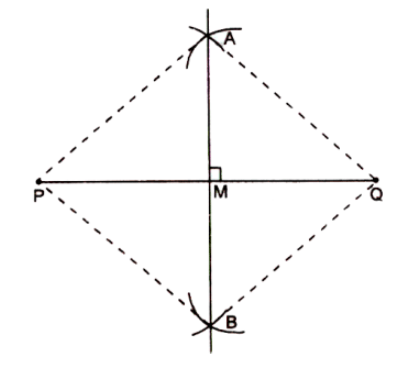