Graph Of A Linear Equation In Two Variables

Here, what students need to understand is that the graphical representation of a linear equation in two variables is a straight line.

How To Draw The Graph Of A Linear Equation

Notably, it is always better to take more than two points. To check the accuracy of the answer.

Students can also refer to some of the chapter questions along with their solutions below to gain a clearer idea of the concept.

Question 2: A number is 27 more than the number obtained by reversing its digits. If its unit’s and ten’s digits are x and y respectively, write the linear equation representing the above statement.

Solution: You need to plot the given equation on the graphs and then you will get a point of intersection. Take the number from this point and this is basically the solution to the equations which is (2, -1). 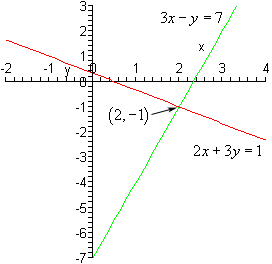 Get the latest information about AP Board and access various study materials, including syllabus, timetable, hall tickets only at BYJU’s.