The topic of triangles in Maths is usually studied in many classes. However, as students progress from a primary to secondary to higher education, the topic gets more advanced and students have to study it in more depth along with many other related terms. As such, in Class 9 Maths of Andhra Pradesh board, students are introduced to properties of triangles and other complex concepts like;

A triangle is a plane figure having three straight sides and usually three angles. Some of the different types of triangles are a right triangle, equilateral triangle, isosceles triangle, scalene triangle, acute triangle and obtuse triangle.

Properties of A Triangle

Students can view some of the chapter questions along with their solutions to know more about the concept.

Question 1: Mid-points of equal sides AB and AC of “ABC are given as E and F in the figure. Prove that BF = CE. 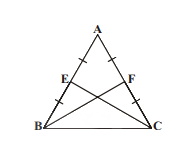