Here, in this article we have provided AP Board SSC Class 10 Social Studies Solved Question Paper 1 2019 in PDF format. All the questions are accurately solved by taking help from the textbook. These solutions are beneficial for students while preparing for their Board exam. Students should go through these AP Board SSC Class 10 Social Studies 2019 question paper 1 solutions to understand the correct approach to write a particular answer. 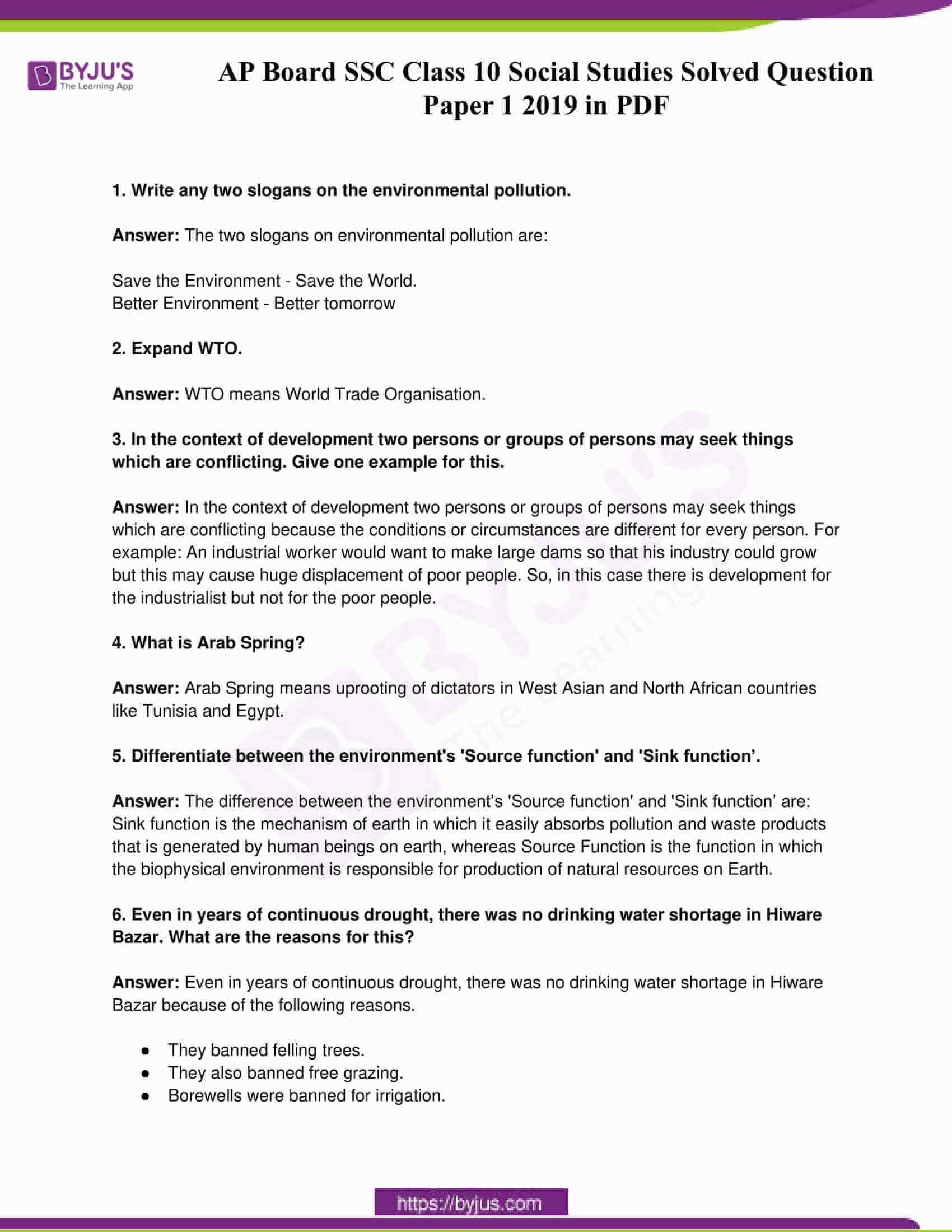 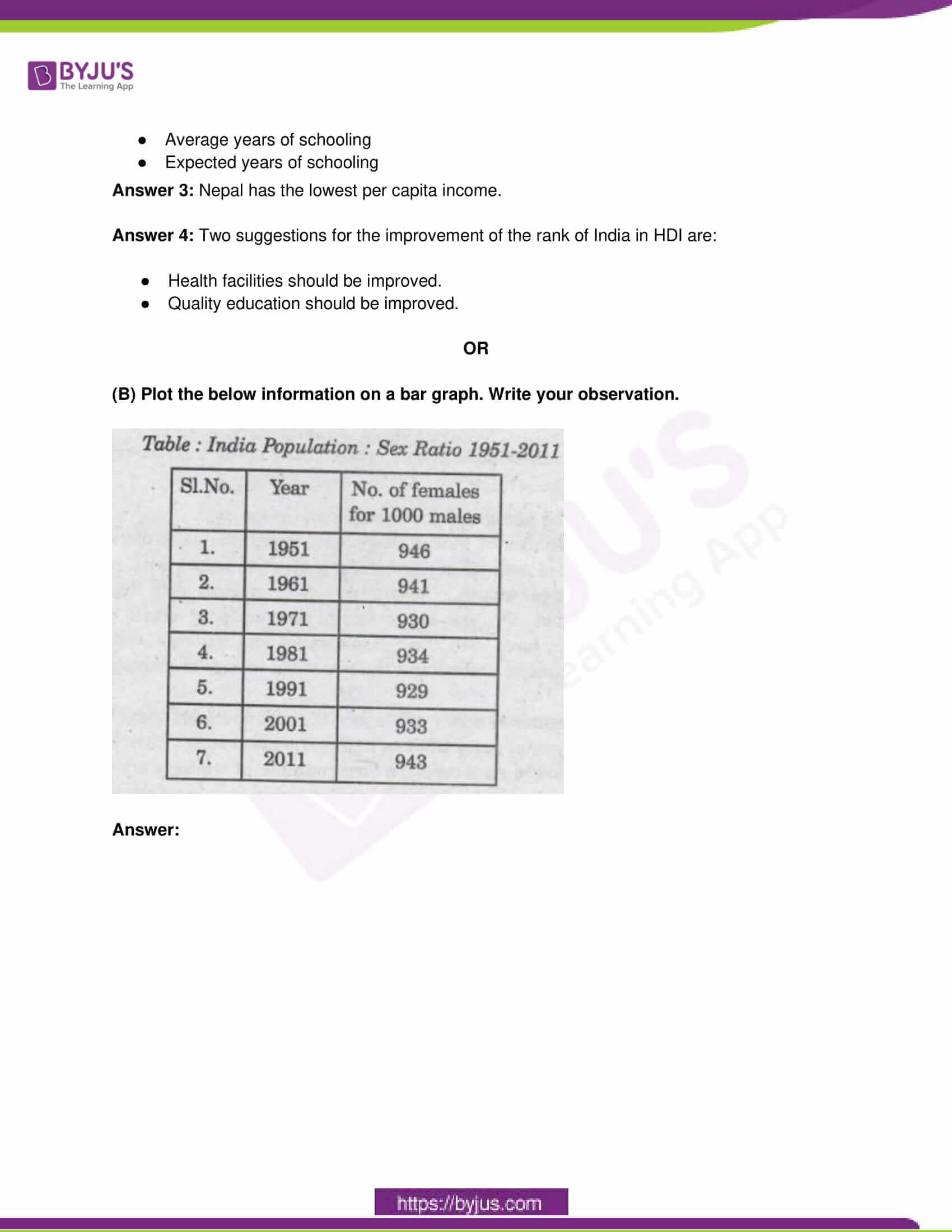 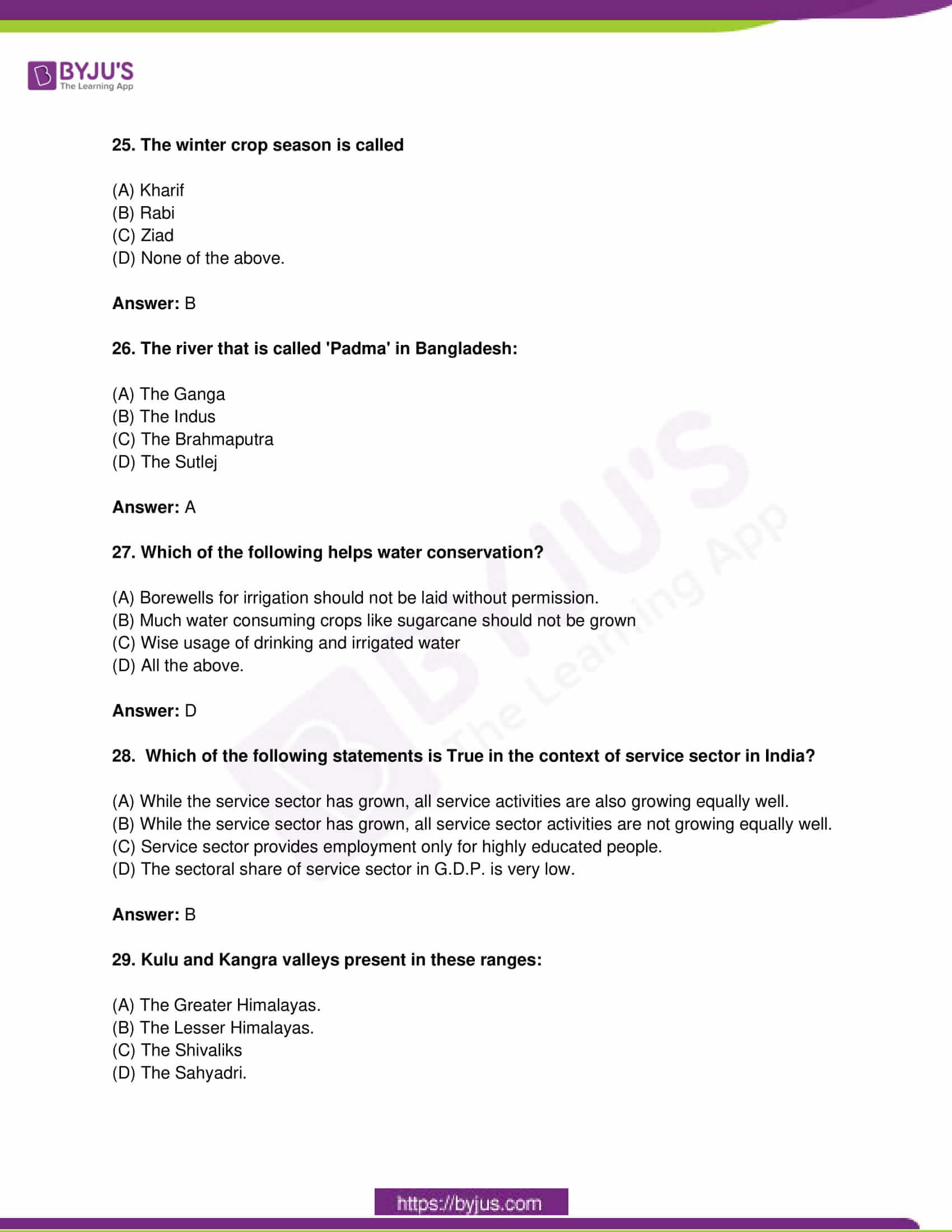 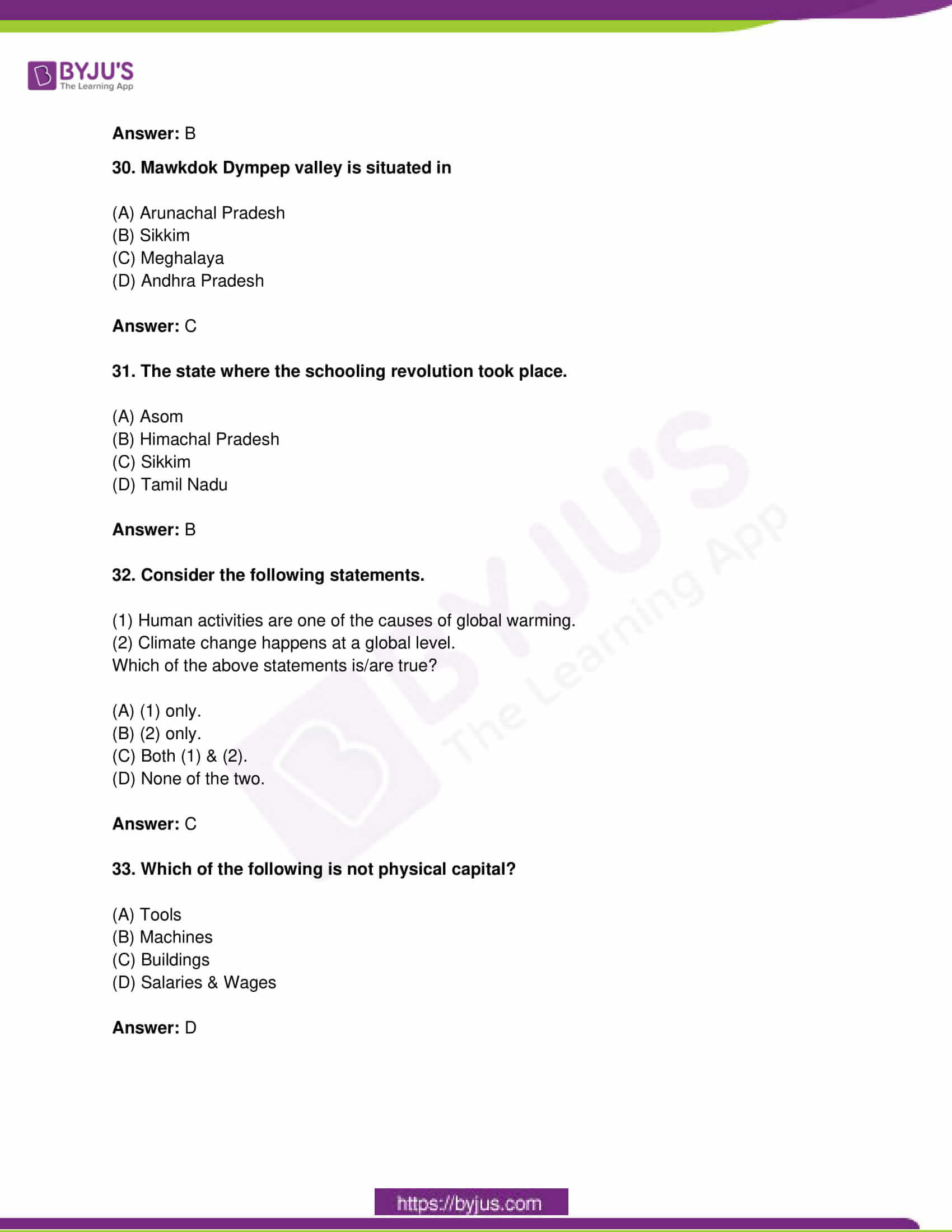 1. Write any two slogans on the environmental pollution.

Answer: The two slogans on environmental pollution are:

Save the Environment – Save the World.

3. In the context of development two persons or groups of persons may seek things which are conflicting. Give one example for this.

Answer: In the context of development two persons or groups of persons may seek things which are conflicting because the conditions or circumstances are different for every person.

An industrial worker would want to make large dams so that his industry could grow but this may cause huge displacement of poor people. So, in this case there is development for the industrialist but not for the poor people.

5. Differentiate between the environment’s ‘Source function’ and ‘Sink function’.

Answer: The difference between the environment’s ‘Source function’ and ‘Sink function’ are:

Sink function is the mechanism of earth in which it easily absorbs pollution and waste products that is generated by human beings on earth,

Whereas, Source Function is the function in which the biophysical environment is responsible for production of natural resources on Earth.

6. Even in years of continuous drought, there was no drinking water shortage in Hiware Bazar. What are the reasons for this?

Answer: Even in years of continuous drought, there was no drinking water shortage in Hiware Bazar because of the following reasons:

7. Study the information given below and write your observations 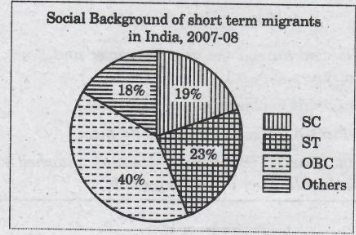 1. The given graph explains the social background of short term migrants in India in 2007-08.

5. In short term migrants Others are 18%

8. Observe the map given below, and answer the following questions.

(a) What is the difference between the eastern and western most points of India?

(b) Name any two countries that share their boundaries with India. Answer a: The difference between the eastern and western most points of India is 2933km.

Answer b: The two countries that share their boundaries with India are Nepal and Pakistan.

9. How would the rapid extraction of natural resources affect the future development prospects? Explain.

Answer: With the population explosion, there are more people to feed and facilitate

10. (A) Explain the differences between the Eastern Ghats and the Western Ghats.

Public distribution system ensures better food security for people. The Food corporation of India (F.C.I) procures food and distributes this food among the poorer section of the society by the government. This is called Public Distribution System ( P.D.S). This food is stored in Fair Price Shops or Ration shops .

It includes food grains, wheat, rice, sugar, kerosene oil for cooking. These things are sold to poor people at a very low price as compared to market price. Hence people with low wages can get food at low income because of PDS and have a relief of security of their food. Hence, PDS ensures better food security for people.

The benefits of globalisation have been unevenly distributed. It has benefited well-off consumers and also producers with skill, education and huge wealth. Certain services, enabled with technology, have expanded. On the other hand, thousands of small producers and workers have seen their employment and workers rights erode. It is important to understand the two sided nature of globalisation.

The effects of globalisation are:

12 (A) Observe the table and answer the following questions.

1. Which country stands ahead of India in all aspects in HDI?

2. Mention the aspects that are considered in making the Human Development Index?

3. Name the country that has the lowest per capita income?

4. Give two suggestions for the improvement of the rank of India in HDI.

Answer 1: Sri Lanka stands ahead of India in all aspects in HDI.

Answer 2: The aspects that are considered in making the Human Development Index are:

Answer 3: Nepal has the lowest per capita income.

Answer 4: Two suggestions for the improvement of the rank of India in HDI are:

(B) Plot the below information on a bar graph. Write your observation. 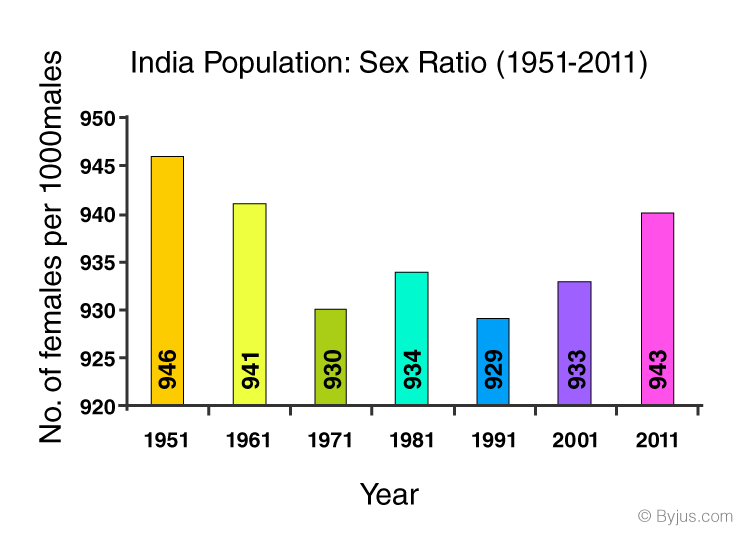 13. Locate the following in the given outline map of India

(B) 1. The river which flows in the Thar Desert.

2. The southern boundary of the Deccan Plateau.

3. The state which has the lowest population density.

4. The latitude that divides India in two halves. 15. Which article provides the Right to Life?

16. The origin of the river Krishna.

17. Total value of goods and services produced in a country during a particular year.

18. Which coast receives low rainfall during the south-west monsoon?

20. Liberalisation in India was started around …. ·

21. The Bhimbedka Rock Shelters, used by the early humans, were situated in this state.

22. The first state that implemented the Mid-day Meal Scheme:

Which of the following statement is/are True?

24. The National Institute of Nutrition is situated at ….

25. The winter crop season is called

26. The river that is called ‘Padma’ in Bangladesh:

27. Which of the following helps water conservation?

(A) Borewells for irrigation should not be laid without permission.

(B) Much water consuming crops like sugarcane should not be grown

28. Which of the following statements is True in the context of service sector in India?

(A) While the service sector has grown, all service activities are also growing equally well.

(D) The sectoral share of service sector in G.D.P. is very low.

29. Kulu and Kangra valleys present in these ranges:

(A) The Greater Himalayas.

(B) The Lesser Himalayas.

31. The state where the schooling revolution took place.

(1) Human activities are one of the causes of global warming.

33. Which of the following is not physical capital?