The electron was the first fundamental particle that was discovered. The credit for the discovery of the electron and its properties goes to J.J. Thomson based on his experiments carried out in a discharge tube. He suggested that electrons are necessary constituents of all atoms. J.J. Thomson carried out experiments by taking a gas at low pressure of 0.01mm Hg in a discharge tube.

Recommended Video on Discovery of Electron 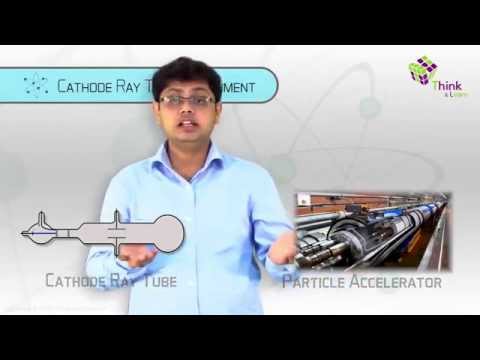 The smallest unit in the composition of matter is the atom. The atom is composed of a nucleus at the center and one or more electrons orbiting around the nucleus. The nucleus consists of protons and neutrons, collectively called nucleons. The protons are positively charged particles with a mass of 1.00728 amu and the neutrons are electrically neutral particles with mass of 1.00867 amu.

The electrons are negatively charged particles with a mass of 0.000549 amu. The protons and neutrons are about 1836 times heavier than the electrons. The number of electrons is equal to the number of protons thus resulting in a neutral atom of an element. The electronic arrangements determine the chemical properties of an element whereas the nuclear structure dictates the stability and radioactive transformation of the atom.

J.J.Thomson carried out experiments by taking a gas at low pressure of 0.01mm Hg in a discharge tube. A discharge tube is a long glass tube having two metal plates connected to the oppositely charged poles of a battery. These metals plates are called cathode and anode. Application of high voltage results in ionisation of gas by ejection of negatively charged particles which were named as electrons. These particles originate from cathode rays.

The discovery of electrons and protons as subatomic particles inside the atom lead to the conception of atomic models which depict the arrangement of the fundamental particles in an atom.

Electronic configuration is written as a series of numbers for example, oxygen is 2, 6 and aluminum is 2, 8, 3.

How the electron was discovered?

J.J. Experiments with cathode ray tubes by Thomson showed that all the atoms contain tiny subatomic particles or electrons that are negatively charged. Thomson suggested the atom’s plum pudding concept, which had negatively charged electrons trapped in a “soup” filled with positive energy.

The atomic nucleus is the small, dense area at the center of an atom composed of protons and neutrons, discovered in 1911 by Ernest Rutherford based on the gold foil experiment performed in 1909 by Geiger – Marsden.

What is the charge of one electron?

The electron has an incredibly low mass, similar to protons and neutrons. Both the electron and the proton however have the same charging magnitude. Charges are calculated by units known as coulombs(C). The charge is 1.6 x 10–19 Coulomb on one electron.

Why is an electron negative?

Electrons are negative. The reason for this is that the proton is positive. A proton attracts an electron by attracting each other by opposite charges, while two electrons repel each other. The polarity of the charge on an electron and a proton is thus shown to be the opposite.

How do electrons move?

Test your Knowledge on Discovery of electron!
Q5