An epoxide is a cyclic ether which contains a three atom ring that approximates an equilateral triangle.  These are highly reactive when compared to other ethers. The fundamental structure of an epoxide contains two carbon atoms of a hydrocarbon attached to an oxygen atom. The structure can be chemically shown as 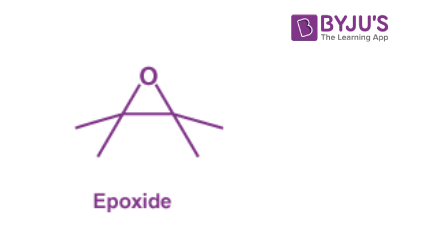 Economically Ethylene oxide is the most important epoxide and is created by the oxidation of ethylene over a silver catalyst. It is used as a fumigant and to make ethylene glycol, antifreeze and other useful compounds.

Epoxide can be synthesized in many ways. Propylene oxide and Ethylene oxide are the two epoxides that are produced on a large scale, approximately 3 and 15 tonnes/year respectively.

When ethylene reacts with oxygen under a silver catalyst, the epoxide is formed. According to stoichiometry, it can be chemically expressed as

Chiral epoxides can be made from prochiral alkenes. A lot of metal complexes act as active catalysts and the most important among them are vanadium, molybdenum and titanium.

Electron deficient olefins can be epoxidized using compounds such as peroxides. This reaction has two steps: firstly, the nucleophilic conjugate is added to an oxygen atom to give a stabilized carbanion.

Epoxides are not common in nature. They are produced generally by oxygenation of alkenes.

An epoxide is a cyclic ether which contains a three atom ring that approximates an equilateral triangle.

What is nucleophilic epoxidation?

By the usage of compounds such as peroxides, electron-deficient olefins can be epoxidized. Now, this form of reaction has two steps. In the first step, the nucleophilic conjugate is added to the oxygen atom in order to give a stabilized carbanion.

What are the uses of epoxidation?

The uses of epoxidation are;
Generation of detergents and surfactants.
It is used as a stabilizer in different forms of materials like polyvinyl chloride.
They are also useful in a few things for instance aerosols, resins and also in chemical intermediates.

Why are certain Epoxides toxic?

The high reactivity of epoxides makes them mutagenic which is why certain epoxides are toxic.

Epoxides are also used in things like insecticides, aerosols, resins and chemical intermediates.

Take up a quiz on Epoxide
Q5