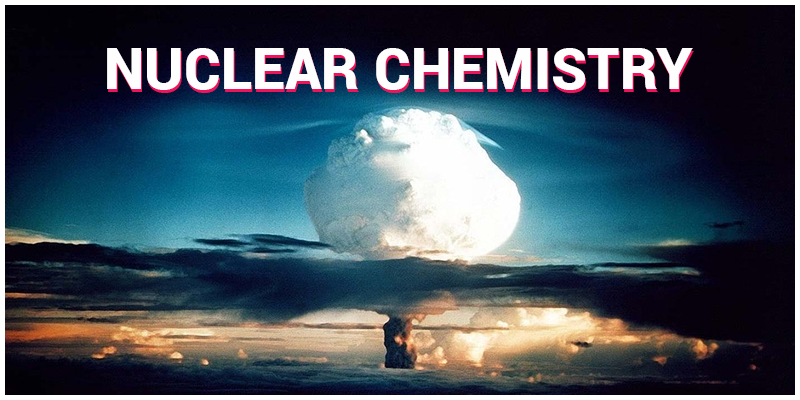 What is Nuclear Chemistry?

Nuclear chemistry is the study of the physical and chemical properties of elements which are influenced by changes in the structure of the atomic nucleus. It also deals with the energy released from nuclear reactions and its uses. It is also termed as radiochemistry which includes the study of the formation of the elements in the universe, the design of radioactive drugs for diagnostic medicine and many other applications.

There are three types of radioactive radiations which were sorted out by Rutherford in 1902 by passing them between two oppositely charged plates.

Unlike a normal chemical reaction that forms molecules, nuclear reactions result in the transformation of one element into another. This property of nuclear reactions is used in nuclear power plants to gather nuclear energy. The three common types of radiations are explained below.

It is the emission part of an alpha particle from an atom’s nucleus.  The α particle includes two protons and two neutrons and is much similar to Helium (He )nucleus 4He2. When an atom emits an α particle, the atomic mass of an atom decreases by 4 units.

When an atom emits a β particle, the mass of the atom will not change. The atomic number will increase by one.

It involves the emission of electromagnetic energy from an atom’s nucleus. During gamma radiation, no particles are emitted and thus it does not cause the transmutation of atoms.

While most elements undergo radioactive decay naturally, nuclear reactions can be stimulated artificially. Such types of reactions are mentioned below.

To learn more about nuclear chemistry topics like nuclear fusion and more, register with BYJU’S and download our app.