Preparation Of Alkynes From Vicinal Dihalides And Calcium Carbide

This topic explains the different methods of preparation of alkynes from dihalides and calcium carbide. Alkynes in organic chemistry are unsaturated hydrocarbons in which there exists, at least, a single, triple bond between the carbon-carbon atoms. Synthesis of Alkynes can be useful due to its antibacterial, antifungal and antiparasitic properties. The main reaction in the preparation of alkynes is that the ions elimination from molecules which result in the formation of pi bonds. Usually, one of two processes are involved in the manufacturing of alkynes: generation of the triple bond between carbon-carbon atoms or the number of molecules which contain a triple bond should be increased.

In this method of preparation, alkenes are made to react with a halogen. Due to this reaction, a substituted alkane is obtained. Alkanes formed are further passed through alcoholic KOH in order to form substituted alkenes. It is then made to react with sodium amide to form alkynes. This process is called dehydrohalogenation as hydrogen is eliminated along with a halogen in order to obtain an alkyne. 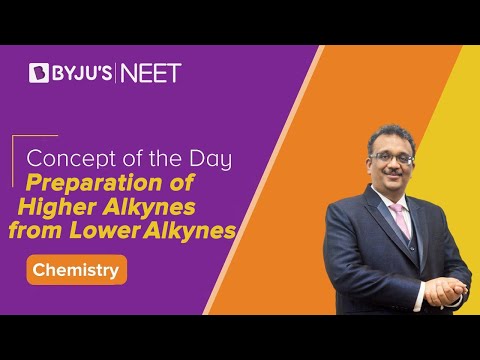 Preparation of acetylene from calcium carbide

For large scale production of an alkyne, calcium carbide (CaC2) is made to react with water. It is prepared by heating quicklime in the presence of coke. Quicklime is obtained by introducing limestone to heat. The reactions for the preparation of acetylene from calcium carbide are as shown below:

The first step is to prepare the unsaturated halides. The halides formed have a halogen attached to a double-bonded carbon. These halides are called vinylic halides which are not reactive in nature. These halides are made to react with the strong base which results in the formation of alkynes. Metal acetylides are used to convert small alkynes into large ones. 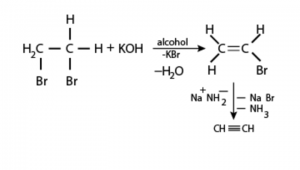 Preparation of alkynes from vicinal dihalides

To learn more about the preparation of alkynes download BYJU’S the learning app.

False. They are weakly acidic.

Alkynes are obtained from vicinal dihalides by the process dehydrohalogenation.

Test Your Knowledge On Preparation Of Alkynes!
Q5