Aluminum is found as aluminosilicates (containing aluminium, silicon, and oxygen) in different forms of clay in various concentrations in nature. They eventually break down into different types of hydrated aluminium oxide, Al2O3.xH2O, known as bauxite, as the minerals are weathered.

Often, bauxite is considered to be a mineral, but it’s really a rock. Bauxite is aluminium ‘s main ore. It is produced as a result of chemical weathering in tropical climates; the leaching of silica in aluminium-bearing rocks. For the upstream aluminium supply chain members, bauxite has for some time now been a focus market. The protection of the supply of ore plays a key role in managing the logistics costs of the industry, which in turn helps to optimise the total cost of aluminium production.

“Bauxite is primarily a metallic mineral though it is also used as an industrial mineral. It is the only ore used for large scale aluminium production.” Much of the bauxite is formed by the desilication of clays. The alumina-rich components of igneous rocks weather to clay more easily than the mica and chlorite of the phyllites. 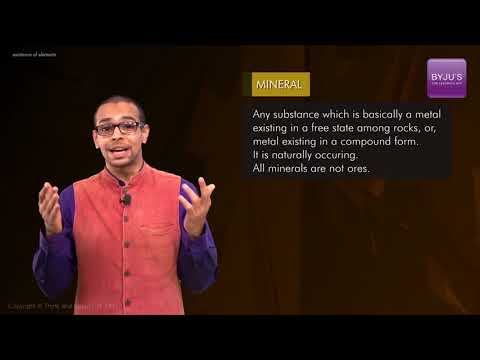 The most common metal on Earth is aluminium, but it is costly, mainly because of the amount of energy required in the production process. Bauxite (Al2O3) is called aluminium ore. The bauxite is purified to yield a white powder from which aluminium can be extracted-aluminium oxide (also known as alumina).

By the Bayer Process, the bauxite is purified. The ore is first combined with a hot, condensed sodium hydroxide solution. Aluminum and silicon oxides, but not other impurities such as iron oxides, can be dissolved by NaOH, which remains insoluble. By filtration, the insoluble materials are removed.

The term bauxite is used for naturally occurring mixtures of aluminum monohydrate. The bauxite used by the chemical and refractory industries in the United States in 1959 amounted to about 320,000 long dry tons. Bauxite is used mainly as an ore of aluminum and as raw material for the manufacture of aluminum chemicals.

Bauxite is an aluminium-rich ore used for the manufacture of aluminium (metallurgical bauxite) and refractory products, chemicals or cements. Bauxite is a prime important raw material for the primary aluminium industry. It is also used in a number of non metallurgical sectors, like refractory, abrasive, cement, steel making and chemicals.

Bauxite is a mixture of minerals which contain, as well as impurities, different concentrations of hydrated aluminium oxides. Gibbsite (alumina trihydrate), boehmite, and diaspore (alumina monohydrates) are the main ore minerals.

Bauxite is a high-aluminum-content rock. That is the main ore that aluminium is mined from. One of the most common elements on earth is bauxite. It contains almost 25 percent-30% alumina. In the belt around the equator, bauxite is commonly found.

The primary aluminium bearing ore with an aluminium content of more than 35 to 40 percent is bauxite. Therefore, owing to the rising production of primary aluminium, demand for bauxite is projected to grow dramatically in the future. A combination of aluminium hydroxides, clay crystals, aluminium hydrous oxides and insoluble compounds such as hematite, magnetite, quartz, goethite, and siderite is bauxite. In Bauxite, aluminium minerals include Al(OH)3 gibbite, diaspore, AlO(OH) and AlO(OH) boehmite.

What is the mineral bauxite used for?

How is bauxite formed?

Bauxite deposits are primarily produced by aluminous rock weathering; some have been transported to their present sites, but most are residual accumulations from which most other components of the parent rock have been leached, other than alumina.

Where is bauxite found?

Bauxite is usually found in different tropical and subtropical areas of the topsoil. Via environmentally friendly strip-mining practises, the gold is acquired. In Africa, Oceania and South America, bauxite deposits are the most abundant.

Is bauxite on the periodic table?

Bauxite is a clay mineral combined with iron, silicon, titanium, sulphur, gallium, chromium, vanadium oxides, as well as sulphuric calcium , iron and magnesium carbonates containing various aluminium hydroxide modifications. In other words, about half the periodic table is found in an average bauxite.

Does bauxite mining affect the environment?

Rehabilitation of mined-out areas and the dumping of tailings are the major environmental issues associated with bauxite mining. Dust pollutants composed of clay and bauxite fragments from the chimneys of dryers can also cause concerns.

What type of mining is used for bauxite?

Bauxite is usually mined by open cast mining, with methods that differ significantly depending on the region, and is almost always located near the surface.

How do you identify bauxite?

Bauxite, on the Mohs scale, is usually a mild mineral with a hardness of just 1 to 3. With a pisolitic shape, earthy lustre and a low specific gravity of between 2.0 and 2.5, it is white to grey to reddish brown.

Test your knowledge on bauxite!
Q5