It states that in the ground state of an ion or an atom, the atomic orbitals of the electrons fill the lowest available energy levels before they occupy the higher levels. For instance, 2s subshell is filled after the 1s shell is occupied. Hence the most stable electron configuration is achieved.

p orbital has 3 degenerate orbitals. All three have the same energy levels. Each orbital is first assigned with only one electron. The second electron will be of opposite spin. Each orbital is filled and the total is six electrons.

Explanation of Degenerate Orbitals with Diagram 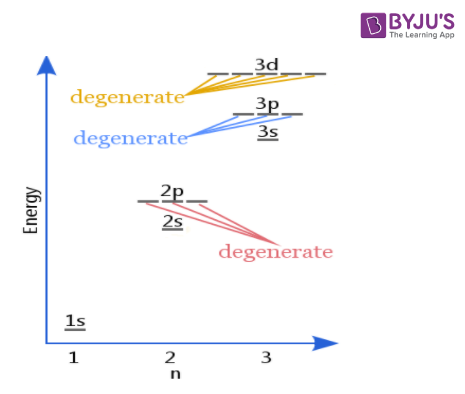 Degeneracy – The total number of different states of the same energy is called degeneracy. It is also known as the degree of degeneracy.

To learn more about degenerate orbitals, register with BYJU’S and download our app.