Difference between Petrol and Diesel Engine

The primary difference between Petrol and Diesel engines is that the Petrol engine works on the Otto cycle whereas the Diesel engine works on the Diesel cycle. Other differences can be attributed to the structure, types, and uses of these engines. The main parameter they are classified on is the type of fuel they use. Generally, Engines run on the principle of heat transfer. 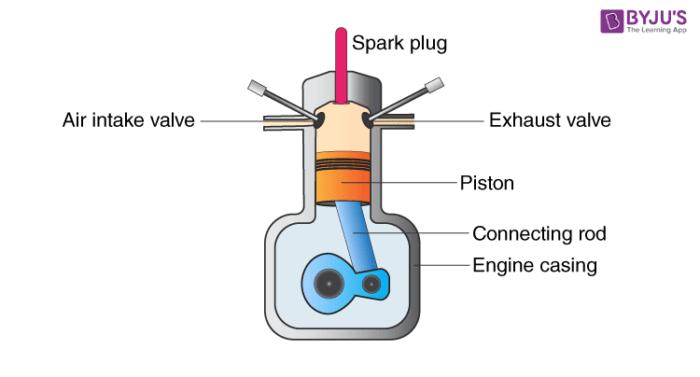 Difference between Petrol and Diesel Engine

Apart from the type of fuel used, the engines are also divided on the basis of a lot of things, such as the presence of a spark plug in Petrol engines and a fuel injector in Diesel engines. We also know that lighter vehicles such as motorcycles, scooters, and cars typically use petrol in their engines whereas Diesel is used in much heavier machinery such as tractors, trucks, and buses. Thus, the types of fuel used also plays a major role in defining the major difference between Petrol and Diesel engines. More differences between these types of engines are listed in the tabular column below.

Explain how the use of CNG in automobiles has reduced pollution in our cities.

Combustion of fuels like petroleum causes the addition of many harmful pollutants like un-burnt carbon, particulate matter, and many fume gases enter the air and cause respiratory diseases.
Compressed Natural Gas (CNG) produces these harmful products in very little quantity.
It is a comparatively cleaner fuel. Therefore, the use of CNG has reduced pollution in our cities.

Give reasons : LPG is a better domestic fuel than wood.

LPG is a better domestic fuel than wood as

Name the unit in which the calorific value of a fuel is expressed.

The calorific value of a fuel is expressed in kilojoules per kilogram (kJ/kg).

Explain how CO2 is able to control fires.

CO2 is a non-combustible gas and it is also a non-supporter of combustion. It extinguishes fire in two ways:
Since it is heavier than oxygen, it covers the fire like a blanket around the burning material and cuts off the contact between oxygen and fuel.

In cylinders, CO2​ is kept in liquid form. When released, it expands enormously and cools down. This brings down the temperature of the fuel, which helps in controlling the fire.

Thus, the important differences between Petrol and Diesel engines are discussed briefly in this article. To learn more about these engines, and how they can be replaced with fuel cells, register with BYJU’S and download the mobile application on your smartphone.

Test your knowledge on difference between diesel and petrol engine!
Q5