What is Fischer Indole Synthesis?

Indole synthesis has provided an ample playground for both organic chemists and medicinal chemists. Each year, thousands of indole derivatives are made in pursuit of life-saving medicines.

The Fischer indole synthesis is one of the oldest and most effective methods of indole development and was first invented by Fischer in 1883. A variety of indole may be prepared from aryl hydrazines and substituted ketones or aldehydes in the presence of Brønsted or Lewis acids.

The most useful route to indoles is the Fischer indole synthesis in which an aromatic phenylhydrazone is heated in acid. Phenylhydrazone is the condensation product from a phenylhydrazine and an aldehyde or ketone. Ring closure involves a cyclic rearrangement process.

The Fischer indole synthesis has become the most popular method to prepare indole rings since its discovery in 1883 by Emil Fischer. In essence, the Fischer indole synthesis can be regarded as the cyclization of an arylhydrazone, prepared from aryl hydrazine and aldehyde or a ketone by treatment with an acid catalyst or effected thermally to form the indole nucleus. The mechanism has been the subject of intensive investigations for over a century, and many intermediates have been isolated and characterized.

The Fischer indole synthesis reaction is given below.

There has probably been more work carried out on the synthesis of indoles than on any other single heterocyclic system, and consequently, many routes are available; ring syntheses of benzofurans and benzo thiophenes have been much less studied. The Fischer indole synthesis now more than 100 years old, is still widely used – an aryl hydrazone is heated with an acid, a multi-step sequence ensues, ammonia is lost, and indole is formed.

The resulting double imine then re-aromatizes the benzene ring to provide an anilino imine, whose nucleophilic amine group attacks the imine intramolecularly to afford the amino indoline. Loss of a molecule of ammonia and aromatization then deliver the indole.

The hydrazine behaves as an amine towards a carbonyl compound and forms the imine like the product, a hydrazone. The cycle rearrangement involves the enamine tautomer of this hydrazone and proceeds because the cyclic flow of electrons forms a strong C-C bond whilst cleaving a weak N-N bond. This produces what appears to be a di-imine. 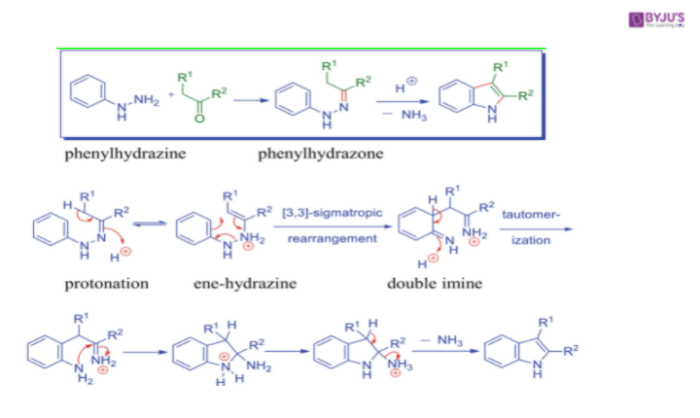 One of these is involved in rearomatization and creates nan aromatic amine. This then attacks the other imine function, and we get the nitrogen equivalent of a hemiketal. Finally acid catalysed elimination of ammonia gives the aromatic indole system.

Unfortunately, the reaction fails with acetaldehyde and cannot, therefore be used to synthesize indole itself. It is possible to use the keto acid pyruvic acid instead and decarboxylate the product to yield indole.

The key characteristics of the Fischer Indole Synthesis are: 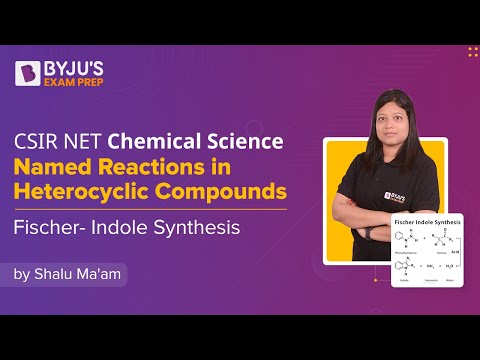 How is indole produced?

Indole is produced by reductive deamination of tryptophan via the intermediate molecule indole pyruvic acid. Tryptophanase catalyzes the deamination process from which the tryptophan molecule group amine (-NH2) is extracted. The final reaction products are indole, pyruvate, ammonium ( NH4+) and water.

What is an indole group?

Indole is an organic heterocyclic aromatic compound with formula C8H7N. It has a bicyclic composition, consisting of a six-piece benzene ring fused to a five-piece pyrrole ring. Indole is commonly spread in the natural world and can be produced by a wide range of bacteria.

Where is indole found?

An indole is a solid man at room temperature. It occurs naturally in human faeces and has a strong faecal odour. At very low concentrations, however, it has a floral scent and is a component of many floral scents (such as orange blossoms) and perfumes. This exists in coal tar as well.

Indoles are chemical compounds that can look like jasmine (Jasmine is naturally indolent) or faeces. They can also be made synthetically, and perfumers use them to enhance the floral scent. For some people, the indols smell like a sour odour. Others have an animal piss or fur scent.

What does indole positive mean?

The indole test is a biochemical study conducted on bacterial organisms to assess the ability of the organism to transform tryptophan into indole. This separation is done by a series of various intracellular enzymes, a mechanism commonly referred to as “tryptophanase.”

How is indole detected?

The indole test is used to assess the ability of the body to break down the amino acid tryptophan to form the indole compound. Indole production is observed by Kovac or Ehrlich’s reagent containing 4 (p)-dimethylamino benzaldehyde, which interacts with indole to create a red coloured compound.

Is indole acidic or basic?

Indoles, consisting of a pyrrole ring fused to benzene to form 2, 3-benzopyrrole, are compounds forming an indole moiety. Indole is a solid, partially soluble compound (in water) and an extremely weak acidic compound (essentially neutral).

What is the starting material used in Fischer indole synthesis?

The synthesis of Fischer indole is an organic reaction used by an acid catalyst to convert phenyl hydrazine and an aldehyde or ketone to an indole. By the acid catalysed reaction of the hydrazine with the carbonyl, the cycle starts with the formation of a phenylhydrazone.

Why do bacteria produce indole?

In the inquiry of bacterial contact, several chemical compounds have been found and each has a biological tale to tell. Indole is a direct consequence of amino acid catabolism, signals in multidrug exportation, cell division inhibition, stress tolerance, and biofilm-forming.