C6H12N4 is a heterocyclic organic compound with the chemical name Hexamine. It is also called Methenamine, Hexamethylenetetramine or Urotropin.

It acts as an anti-infective agent which is most commonly used to treat urinary tract infections. Its anti-infective action is derived from the slow release of formaldehyde (CH2O) by hydrolysis at acidic pH of 0.2 molars. Methenamine is an odourless colourless lustrous crystal or white crystalline powder which is hygroscopic. 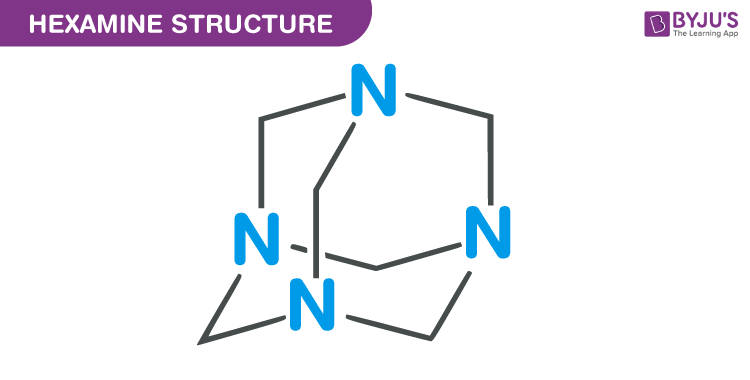 Some symptoms include irritation in the eyes, mucous membranes, upper respiratory tract, and skin. It can also cause kidney irritation and skin rash. Inhaling this compound causes shortness of breath and coughing. When it comes in contact with the skin it causes redness, rashes, burns, and pain. When comes in contact with the eyes causes redness, blurred vision, and pain. Swallowing this compound results in urinary tract irritation, and digestive disturbances.

Hexamethylenetetramine can be harmful by ingestion, skin absorption, and inhalation. It is an irritation in the upper respiratory tract, eyes, skin, and mucous membranes.

Hexamine is used in adhesives. It is also used as a sealing compound and as a cross-linking agent during the vulcanization of rubber.

Under ambient conditions, hexamine is a white crystalline solid which emanates a fishy, ammonia-like smell.

List 3 named reactions that use hexamine as a chemical reagent

The Duff reaction, the Delepine reaction, and the Sommelet reaction involve the use of hexamine as a chemical reagent.

What is hexamine made from?

Hexamine, also called hexamethylenetetramine or methenamine (INN), is a heterocyclic organic compound that can be prepared by the reaction of formaldehyde and ammonia. It is crystalline and white in appearance.

Hexamine is prepared by the reaction of formaldehyde and ammonia. In an acidic environment, hexamine is converted to toxic formaldehyde, and the main hazard for toxicity is ingestion.

Learn more about the Structure, physical and chemical properties of C6H12N4 from the experts at BYJU’S.

Test your knowledge on Hexamine
Q5