Oppenauer Oxidation is the process of conversion of secondary alcohols to ketones by selective oxidation. This reaction is named after Rupert Viktor Oppenauer. Oxidation reaction takes place in the presence of [Al(i-Pro)3] in excess of acetone.

It is an aluminium alkoxide catalysed oxidation of a secondary alcohol to the corresponding ketone. This is the reverse of the Meerwein Ponndorf Verley reduction. It is a very good method to oxidise allylic alcohols to α, β- unsaturated ketones. 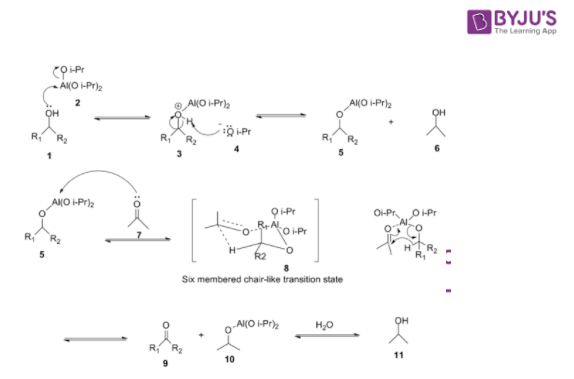 This reaction is used to oxidise alcohols to carbonyl compounds. For example, simple ketone acetone or cyclohexanones is used as the hydride acceptor in the presence of aluminium alkoxide, usually isopropoxide or t-butoxide. The oxidation is the exact reverse of Meerwein-Ponndorf-Verley reduction and involves deprotonation of the alcohol by equilibration with the alkoxide followed by hydride transfer. This equilibrium is generally displaced to the right by using a large excess of the hydride acceptor.

The classical Oppenauer oxidation is a highly chemoselective oxidation process but the disadvantages of this method include the use of high temperatures, large quantities of ketone hydride acceptors and the production of aldol condensation products with the hydride acceptors. Research has focused on the development of more efficient Oppenauer type oxidations that may be performed under milder conditions.

For example, aluminium compounds involved in the oxidation are basic and consequently prototropic shifts can take place within the product. Thus, during the oxidation of cholesterol, the C=C migrates to give α, β – unsaturated ketones.

Oppenauer Oxidation is not a good method to prepare aldehydes since the basic medium induces reactions between aldehydes and ketones eg. aldol condensation. Oppenauer type oxidations may be performed under milder conditions.

What is meant by oxidation reaction?

Oxygen and atmospheric moisture are the major players in corrosion and oxidation. It is a metal surface’s chemical reaction with oxygen that causes some metal to corrode and form the surface’s oxidation or better known as metal oxide.

What is secondary alcohol?

Secondary alcohol is a compound in which a hydroxy moleucle, —OH, is bound to a saturated carbon atom with two other carbon atoms.

Can secondary alcohol be oxidised?

Secondary alcohols are ketones oxidised-and that’s it. For example, if you heat the secondary alcohol propan-2-ol with a diluted sulphuric acid solution of sodium or potassium dichromate(VI), you can form propanone.

What is the functional group of a ketone?

Aldehydes and ketones are organic compounds that include a functional group of carbonyls, C = O. This group’s carbon atom has two remaining bonds that may be occupied by substitutes for hydrogen, alkyl, or aryl. If hydrogen is at least one of these replacements, the compound is an aldehyde.

What happens when primary alcohol is oxidised?

Why is the oxidation of alcohol important?

A significant step in the degradation of fats during human metabolism (e.g. L-malate in oxaloacetate) is the oxidation of alcohol groups into carbonyl groups. It is also possible to provide a reverse reaction in which NADH serves as a biological hydride donor and reducing agent.

Take up a quiz on Oppenauer Oxidation
Q5