Inorganic salts can be obtained with a base through complete or partial neutralization of acid. The part that the acid contributes is called anion in the formation of a salt and the part that the base contributes is called cation. The preliminary examination gives important clues about the presence of some anions or cations. The systematic analysis of anions is an integral part of salt analysis (or qualitative inorganic analysis).

To identify the anionic radicals present in an inorganic mixture of salts by performing various tests.

Qualitative analysis involves the detection and identification of acidic and basic radicals present in inorganic salts. Inorganic salts are formed by the reaction of acids and bases or acidic oxides with a base or basic oxides.

Most of the organic compounds are crystalline solids as they have defined geometrical shapes. Usually, they consist of oppositely charged particles or ions called radicals.

In the salt analysis, two fundamental principles are of great use 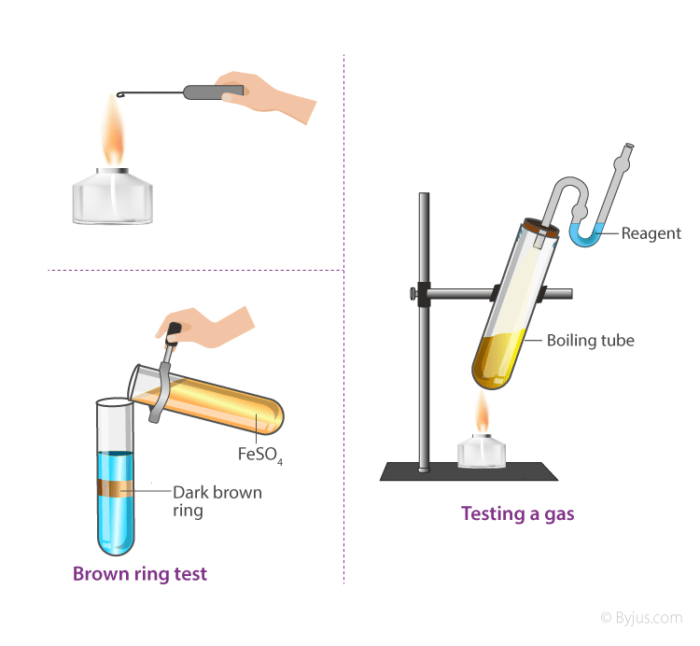 Identification of Anions from Volatile Products:

Take 1 g of salt in a boiling tube or porcelain dish. Mix approximately 3 g of solid sodium carbonate with 15 mL of distilled water. Remove the contents and cook for about 10 minutes. Cool, filter, collect the filtrate in a test tube and label it as an extract of sodium carbonate.

How will you test the presence of carbonate ion?

A dilute acid is used to detect carbonate ions, CO32- Bubbles are released when an acid is added to the test compound, usually diluted hydrochloric acid. Carbon dioxide causes the bubbles using Limewater and the gas is carbon dioxide.

What do you understand by the term common ion effect?

Why does iodine give a blue colour with starch solution?

The iodine test is used to test for starch presence. Starch becomes an intense “blue-black” colour due to the formation of an intermolecular load-transfer complex by adding aqueous solutions of the triiodide anion.

How do you test the presence of sulphide ion?

Describe the layer test for bromide and iodide ions.

In the presence of diluted hydrochloric acid, the layer test is performed by adding Carbon Disulphide to the solution. It will give an orange layer in the case of bromine, whereas in the case of iodine it will give a violet layer.

Test Your Knowledge On Systematic Analysis Of Anions!
Q5