What is the Band Theory of Solids?

Band theory of solids describes the quantum state that an electron takes inside a metal solid. Every molecule comprises various discrete energy levels. The way electrons behave inside a molecule is well explained through band theory. Band Theory was developed from the knowledge gained during the quantum revolution in science. In 1928, Felix Bloch applied quantum theory to solids.

In atoms, electrons are filled in respective energy orbits following Pauli’s exclusion principle. Two atomic orbitals combine to form a molecular orbit with two distinct energy levels. In solids, 1023 stacked up lines confined in a tiny space would look like a band. Thereby forming an energy continuum called energy bands. Band theory helps to visualize the difference between conductor, semiconductor, and an insulator by plotting available energies for an electron in a material.

In band theory of solids, there are many energy bands but the following are the three most important energy bands in solids:

The energy band that consists of valence electrons energy levels, is known as the valence band. The valence band is present below the conduction band and the electrons of this band are loosely bound to the nucleus of the atom.

Energy Band inside an atom 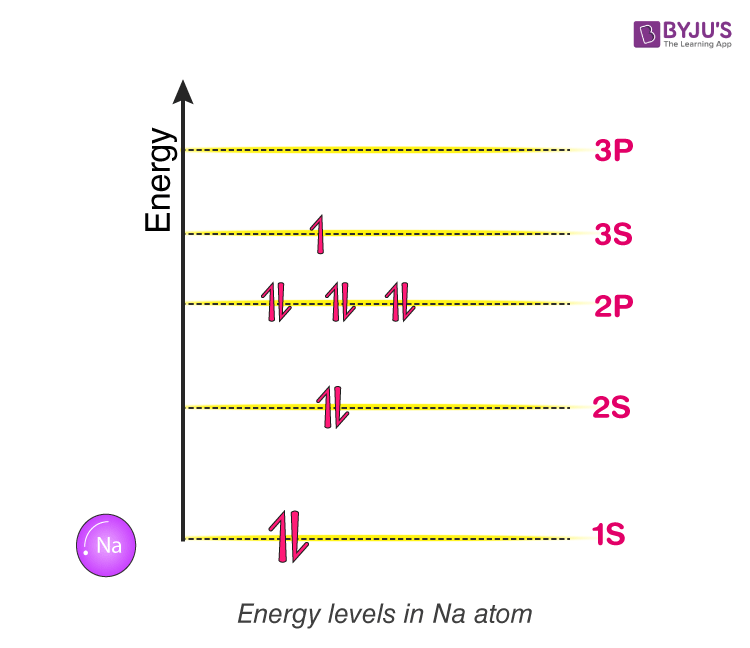 Consider a Sodium atom. It comprises 11 electrons. They fill up the energy level following Pauli’s exclusion principle. Refer to Figure (1).

Energy levels inside a molecule made up of two atoms

What happens when two sodium atoms are very close to each other, almost forming a molecule? Now each atom cannot have the configuration as it followed as an individual atom. If they do, they will violate Pauli’s exclusion principle and end up with many electrons of the same energy levels. 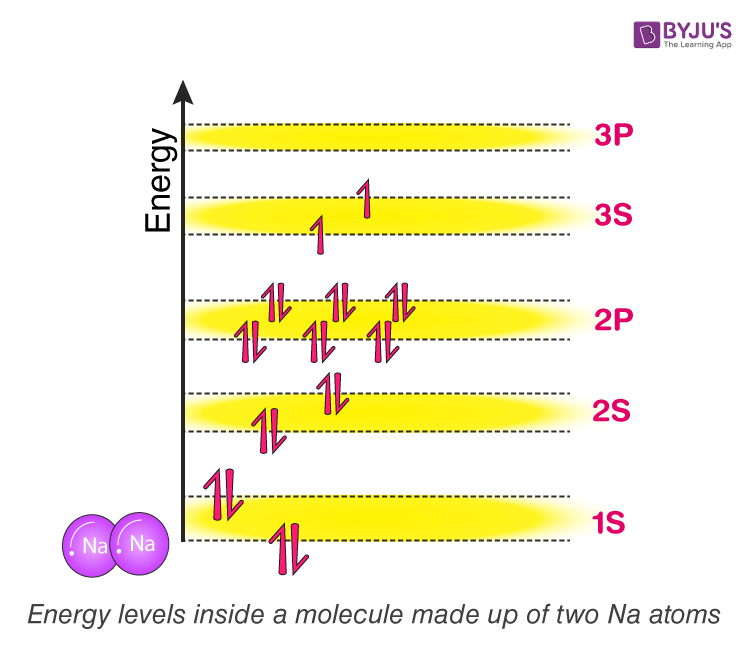 Energy levels inside a molecule made up of three atoms 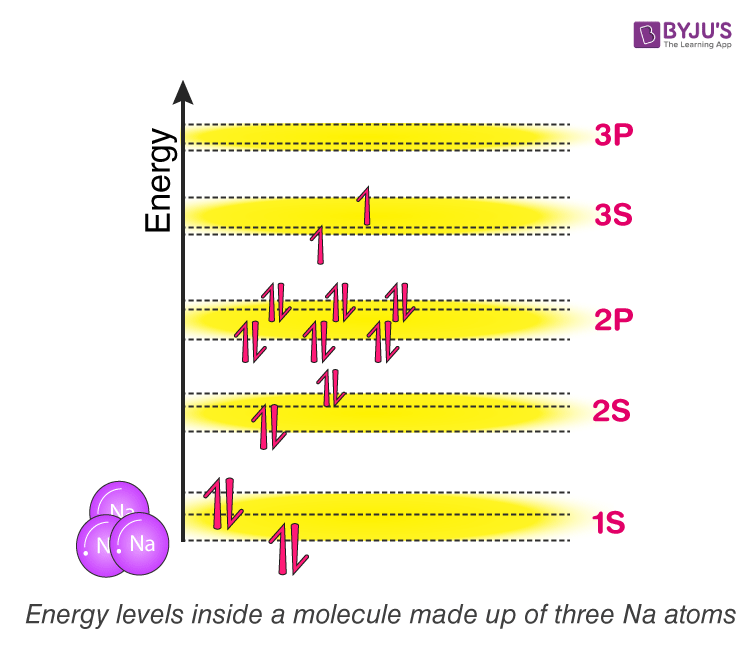 Eventually, if we have an entire solid made of sodium with something like 1023 atoms packed together, Each molecular orbital of this solid will now have 1023 discrete energy levels. For better understanding purposes, think about drawing 1s orbital of Sodium solid block, draw lower energy level and upper energy level, and in between stack it with 1023 energy levels! Refer to figure(4). The gaps between them will be tiny such that, no longer we can notice individual energy levels. As a result, It is convenient to think of it as continuous energy or energy continuum. We can call them an energy band instead of a molecular orbit when we think in this way. 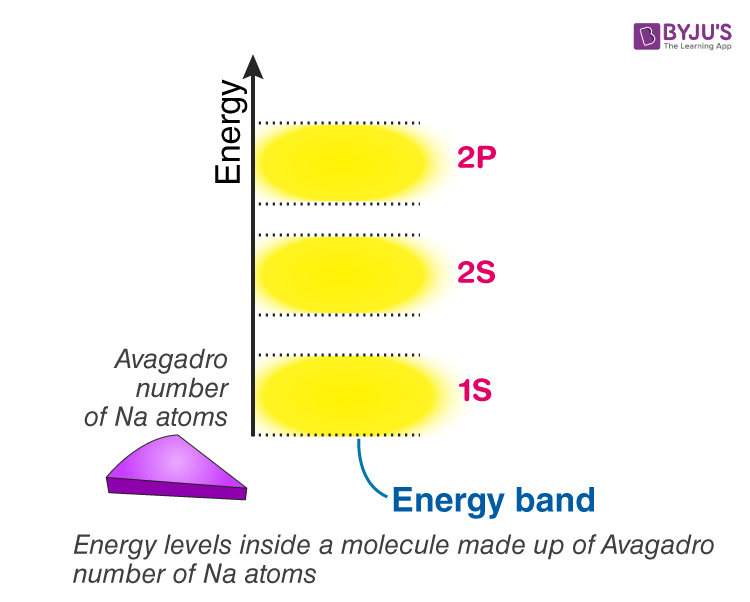 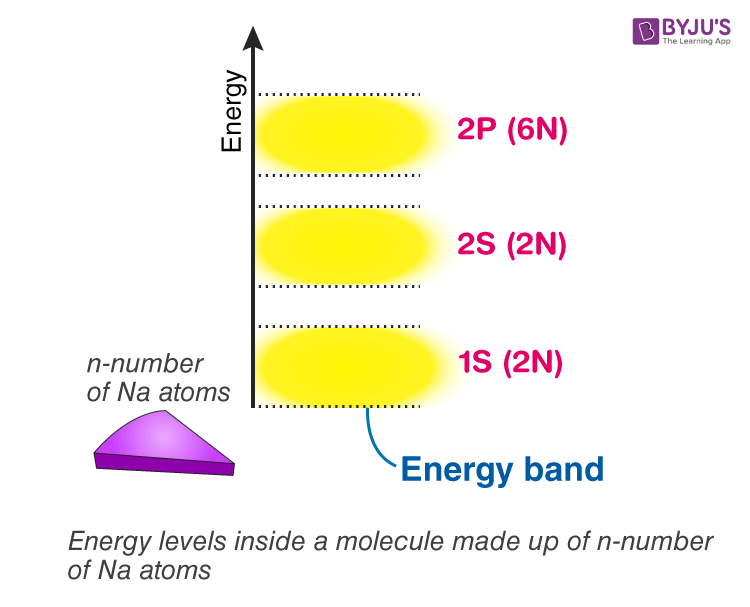 Energy levels inside material of different states of matter

If you have a single atom or if you have gas. In gas, atoms are apart/infinitely apart; we can assume them as single atoms. Here every atom has a discrete energy level, if an electron wants to go from one level to another, it really has to jump as no continuous energy is available(It is similar to steps).
As atoms come close to each other and eventually form a solid, they form an energy continuum, and we name that continuum as bands. Within the bands, available energy levels are continuous. Thus, the name of this theory without any surprise is “The band theory of solids.”
Using this theory, we can understand how free electrons are generated and why certain material readily has free-electron available, making them a conductor and why others don’t?

What is the band theory of Solids?

Band theory of solids is a theoretical model explaining the states of electrons, in solid materials, that can have values of energy only within certain specific ranges.

Who proposed the band theory of solids?

Which are the three important energy bands in solids?

How are solids classified based on the band theory?

Solids are classified into conductors, insulators, and semiconductors based on the band theory.

Which band determines the electrical conductivity of a solid?

The forbidden band determines the conductivity of a solid.

The Solid State is a chapter that requires a lot of visualisation. The theory is concise, but the students usually struggle with the 3D visualisation of all the lattice points and atoms that fit into them. If you get the visualisation right, this chapter is just a matter of some simple math and formulae! The video discusses some handpicked ones from solid-state. 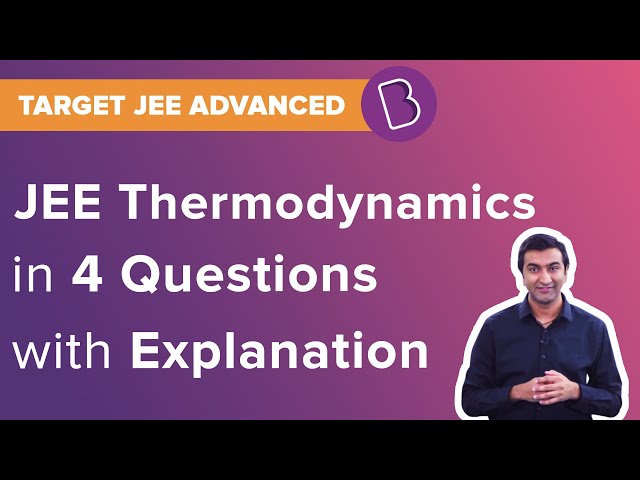 Stay tuned to BYJU’S for the latest updates. Also, register to “BYJU’S the learning app” to get unlimited physics interactive and engaging video lectures.

Test your knowledge on Band theory in solids
Q5