In Physics, the concept of energy is tricky because it has different meanings depending on the context. For example, in atoms and molecules, energy comes in different forms such as light energy, electrical energy, heat energy, etc. In quantum mechanics, it gets even trickier. In this branch of Physics, scientists rely on concepts like Fermi energy which refers to the energy of the highest occupied quantum state in a system of fermions at absolute zero temperature.

What is Fermi Energy?

Named after the Physicist, Enrico Fermi, a Fermi level is the measure of the energy of least tightly held electrons within a solid. It is important in determining the thermal and electrical properties of solids. It can be defined as:

The Fermi energy is a concept in quantum mechanics usually refers to the energy difference between the highest and lowest occupied single-particle states in a quantum system of non-interacting fermions at absolute zero temperature.

The value of the Fermi level at absolute zero temperature (−273.15 °C) is known as the Fermi energy. It is also the maximum kinetic energy an electron can attain at 0K. Fermi energy is constant for each solid.

To determine the lowest possible Fermi energy of a system, we first group the states with equal energy into sets and arrange them in increasing order of energy. We then add particles one at a time, successively filling up the unoccupied quantum states with the lowest energy.

When all the particles are arranged accordingly, the energy of the highest occupied state is the Fermi energy. In Spite of the extraction of all possible energy from metal by cooling it to near absolute zero temperature (0 Kelvin), the electrons in the metal still move around. The fastest ones move at a velocity corresponding to a kinetic energy equal to the Fermi energy. 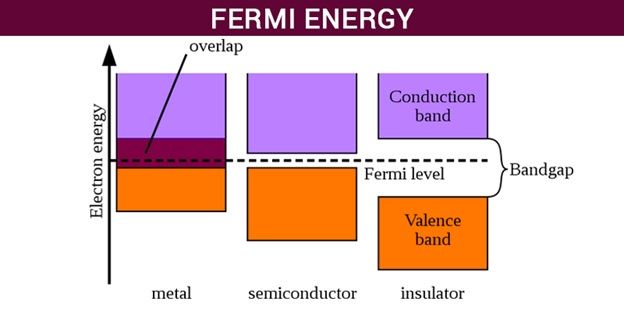 The Fermi level and Fermi energy are usually confusing terms and often used interchangeably to refer each other. Although, both the terms are equal at absolute zero temperature, they are different at other temperature.

Fermi energy is applied in determining the electrical and thermal characteristics of the solids. It is one of the important concepts in superconductor physics and quantum mechanics. It is used in semiconductors and insulators.

What is Fermi Level?

The highest energy level that an electron can occupy at the absolute zero temperature is known as the Fermi Level. The Fermi level lies between the valence band and conduction band because at absolute zero temperature the electrons are all in the lowest energy state. Due to lack of sufficient energy at 0 Kelvin, the Fermi level can be considered as the sea of fermions (or electrons) above which no electrons exist. The Fermi level changes as the solids are warmed and as electrons are added to or withdrawn from the solid.

The reason for the existence of this energy level is due to Pauli’s exclusion principle which states two fermions cannot occupy that same quantum state. So, if a system has more than one fermion, each fermion has a different set of magnetic quantum numbers associated with it.

You make also like to learn more about the following concepts:

It is one of the important concepts in quantum mechanics and condensed matter physics. Some Fermi energy applications are given in the points below.

What is Quasi-fermi energy level?

What happens to the Fermi energy level when p-type and n-type semiconductors are joined together?

Fermi energy level decreases for n-type and for p-type it increases until equilibrium is obtained.

What happens to the Fermi energy level when a forward bias is applied to the PN junction diode?

What happens to the Fermi energy level when a reverse bias is applied to the PN junction diode?

When a reverse bias is applied, for n-type the Fermi energy level decreases, and for p-type it will increase.

For intrinsic semiconductors, where does the Fermi energy level lie?

It lies close to the valence band.