What is Acetaldehyde (CH3CHO)?

C2H4O is an organic chemical compound with chemical name Acetaldehyde.

Acetaldehyde is also called as MeCHO. It is miscible with naptha, gasoline, xylene, ether, turpentine, alcohol and benzene. It has no colour and is a flammable liquid. It has a suffocating smell. It is non-corrosive to many metals but when It has a narcotic action and can cause mucous irritation.

Acetaldehyde is widely used in the manufacturing of perfumes, drugs, acetic acid, flavouring agent, dyes, etc. When acetaldehyde is applied externally for prolonged periods it is toxic. Acetaldehyde was first observed in the year 1774 by the Swedish pharmacist/chemist Carl Wilhelm Scheele.

The formula for Acetaldehyde CH3CHO or C2H4O.

Acetaldehyde can be prepared by the reduction of acetyl chloride with H2 in the presence of palladium deposited over barium sulphate along with a small amount of salt of sulphure or quinoline. This mixture is known as Lindlar’s catalyst. This reaction is called Rosenmund’s Reduction.

Ethene can be converted to acetaldehyde by reacting with an aqueous solution containing Palladium chloride and cupric chloride.

In this reaction CuCl2 Converted Pd  back into PdCl2.

Cuprous chloride is reoxidised to CuCl2 by atmospheric oxygen in the presence of HCl.

Acetylene gets hydrated in the presence of a mixture of diluted H2SO4 and mercuric acid to vinyl alcohol which tautomerises to a more stable compound of acetaldehyde.

The nitrogen atom of phenyl hydrazine acts as a nucleophile which attacks at the electrophilic carbon of acetaldehyde and removes water to give acetaldehyde phenylhydrazone.

Hydrogen cyanide adds across the carbon-oxygen double bond in aldehydes and ketones to produce compounds known as hydroxynitriles. For example, with ethanal (an aldehyde) you get 2-hydroxypropanenitrile. 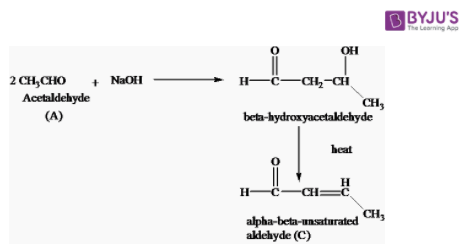 Acetaldehyde is a significantly more potent toxin than ethanol, and its first metabolite, acetaldehyde, is responsible for at least a portion of ethanol toxicity. Some of the acetaldehyde gets into your bloodstream, causing damage to your membranes and possibly scar tissue. It also causes a hangover, as well as a racing heart, a headache, and an upset stomach. Acetaldehyde intoxication has the greatest impact on the brain. It impairs memory and causes issues with brain activity.

Based on insufficient human cancer research and animal studies that showed nasal cancers in rats and laryngeal tumours in hamsters, acetaldehyde is classified as a potential human carcinogen. One of the main culprits mediating the fibrogenic and mutagenic effects of alcohol in the liver is acetaldehyde, a significant toxic metabolite. Acetaldehyde stimulates the development of adducts, which causes functional impairments in essential proteins, such as enzymes, as well as DNA damage, which promotes mutagenesis.

Acetaldehyde is present in various plants, ripe fruits, vegetables, smoke from tobacco, gasoline and exhaust from the engine. This material is commonly used as a flavouring agent and as an intermediate in alcohol metabolism in the manufacture of acetic acid, perfumes, dyes, and medicines. The chemical formula of Acetaldehyde is CH3CHO

What are the health effects of acetaldehyde?

Acute (short-term) exposure to acetaldehyde results in effects which include eye, skin, and respiratory tract irritation. Symptoms of chronic (long-term) acetaldehyde poisoning mimic those of alcoholism.

How does acetaldehyde affect the liver?

A major toxic metabolite, acetaldehyde is one of the main culprits mediating fibrogenic and mutagenic effects of alcohol in the liver. Mechanistically, acetaldehyde promotes the formation of adducts, leading to functional impairments of key proteins, including enzymes, and DNA damage, which promotes mutagenesis.

What is the difference between formaldehyde and acetaldehyde?

The iodoform test will differentiate the formaldehyde and acetaldehyde. Methyl ketones react to yellow precipitate by giving iodine and potassium hydroxide. Acetaldehyde binds to the carboxylic acid with iodine and KOH to give sodium salt. Formaldehyde does not screen for iodoformity.

What are the uses of acetaldehyde?

Will acetaldehyde pass the Tollen’s Test?

Tollen’s test identifies an aldehyde functional group or an alpha-hydroxy ketone functional group in a given material. It uses a Tollen’s reagent, which is caused by combining ammonia and silver nitrate. Since acetaldehyde has -CHO (aldehyde) as a functional group, it will give a positive Tollen test. When acetaldehyde is heated with the reagent, the silver metal is reduced and forms a coat of metallic silver, indicating that the test was successful.

What is the key difference between acetaldehyde and acetone?

Can acetaldehyde act as an excellent reducing agent?

A reducing agent is an agent that undergoes oxidation but reduces others. Acetaldehyde is easily oxidised in strong oxidising agents such as potassium permanganate. Potassium dichromate or mild oxidising agents and is converted into carboxylic acids. Because it has a higher oxidation potential, it will reduce the number of other species. For example, it reduces tollen’s reagent, Benedict’s solution, and Fehling’s solution.

Can acetaldehyde cause an iodoform test to be positive?

The iodoform test is a highly effective method for determining the presence of methyl ketone groups in an unknown compound. Acetaldehyde has the chemical formula CH3CHO. Because it contains the COCH3 group (methyl ketone group), it will result in a positive iodoform test. Remember that it is the only aldehyde that gives this test a positive result.

CnH2n+1CHO is the general formula for aldehydes. What is the “n” value for acetaldehyde?

Learn more about the Structure, physical and chemical properties of Acetaldehyde from the experts at BYJU’S.

Test your Knowledge on Acetaldehyde
Q5