“Alcohols are a group of compounds containing one, two or more hydroxyl (-OH) groups that are attached to the alkane of a single bond. These compounds have a general formula -of OH.”

The alcohols are converted to aldehydes and ketones by the process of oxidation. This is one of the most important reactions in the field of organic chemistry.

Oxidation of Alcohols to Aldehydes and Ketones

Alcohols are a group of compounds containing one, two or more hydroxyl (-OH) groups that are attached to the alkane of a single bond. These compounds have a general formula -of OH. They have primary importance in the field of organic chemistry as they can be changed or converted to different types and types of compounds such as Aldehydes and Ketones, etc. The reactions with alcohol are two different categories. These Reactions can leave the R-O bond or even they can leave O-H bond.

The alcohols are converted to aldehydes and ketones by the process of oxidation. This is one of the most important reactions in the field of organic chemistry.

Oxidizing alcohols to aldehydes and ketones are one of the vital reactions in the field of synthetic organic chemistry. These reactions occur in the presence of catalysts and the best oxidants required for these conversions have high valent ruthenium acting as the catalyst for this kind of reaction. It is very much important to have complete knowledge and also understanding the factors and mechanisms of the oxidation reactions influencing them.

1. Mechanism of conversion Alcohols into Aldehydes and Ketones

The catalytic conversion of the primary type of alcohols into aldehydes and the secondary form of alcohols into ketones are important in the preparation of various synthetic intermediates in organic chemistry.

The preparation of Aldehydes is by oxidizing the primary alcohols. The aldehyde which is produced can be oxidized further to the carboxylic acids by the use of acidified potassium dichromate(VI) solution that is used as an oxidizing agent. The net effect occurs as the oxygen atom of the oxidizing agent eliminates the hydrogen atom from the hydroxyl (-OH) group of alcohol and also one carbon atom attached to it. 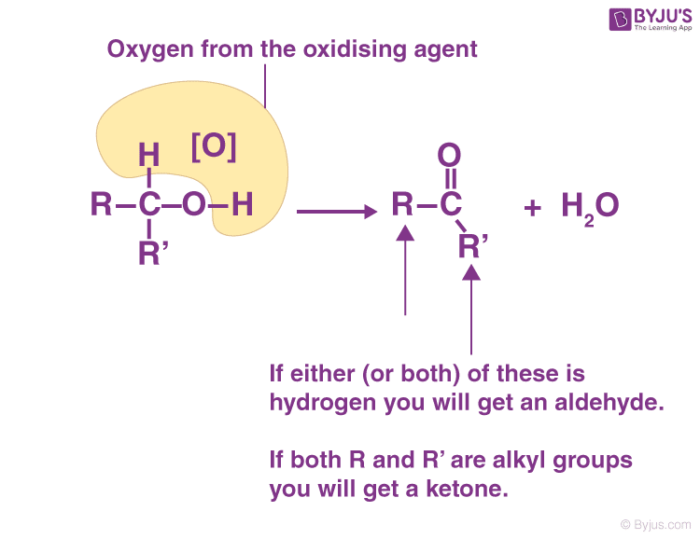 Here, R and R’ are the alkyl groups or hydrogen. If these groups contain the hydrogen atom, you will get the aldehyde. These aldehydes are obtained from the primary alcohols.

The preparation of Ketones is done by the oxidation of secondary alcohols. Consider, for example, heating the secondary alcohol propan-2-ol with the sodium or even potassium dichromate(VI) solution which is acidified with the dilute sulphuric acid, then the ketone called propanone formed.

The occurring reaction is as shown below-

The Ketones obtained cannot be further oxidized because this reaction would involve the breaking up of C–C bond, requiring too much energy.

What are the Different Types of Alcohol?

On the basis of chemical groups attached to the carbon atom, alcohols are divided into three categories:

Each of the three types of alcohol (primary, secondary and tertiary alcohol) exhibits different physical and chemical properties.

Certain tests are carried out for the identification of primary, secondary and tertiary alcohols. Some of these tests are:

Lucas test is based on the difference in reactivity of primary, secondary and tertiary alcohols with hydrogen chloride. In the Lucas test, the alcohol is treated with Lucas reagent (concentrated HCl and ZnCl2). Turbidity is produced as halides of the substituted alcohol are immiscible in Lucas reagent. The time taken to achieve turbidity is noted and the following observations are made:

Thus, the rate of formation of turbidity upon the reaction of an alcohol with Lucas reagent helps us in the identification of primary, secondary and tertiary alcohol.

In the oxidation test, the alcohols are oxidized with sodium dichromate (Na2Cr2O7). The rate of oxidation varies between primary, secondary and tertiary alcohol. On the basis of their oxidation rates, alcohols can be distinguished as:

Thus, the rate of oxidation upon oxidation with sodium dichromate helps us in the identification of primary, secondary and tertiary alcohol.

What is oxidation of ethanol?

Alcohol oxidation is oxidation with respect to the conversion of hydrogen. The alcohol is oxidised as a result of hydrogen degradation. In hydrocarbon chemistry, oxidation and reduction in hydrogen transfer are common. Ethanol is oxidised to form the aldehyde ethanal by sodium dichromate (Na2Cr2O7) acidified in dilute sulphuric acid.

Why are tertiary alcohols not oxidised?

What do secondary alcohols oxidised to?

Can alcohols be oxidized?

How does oxidation of alcohols work?

Click here to know the physical and chemical properties of alcohols. For a detailed discussion on the types of alcohols and the identification of primary, secondary and tertiary alcohol, please visit BYJU’S.
Test your knowledge on alcohols identification!
Q5