Electrolysis is the process of passing an electric current through a substance in the molten or aqueous state thereby decomposing it. Glucose and urea do not dissociate in water because they have no electric charge. Therefore, these substances are called nonelectrolytes. The electrolyte is a compound which conducts electricity in the molten state or when dissolved in water. 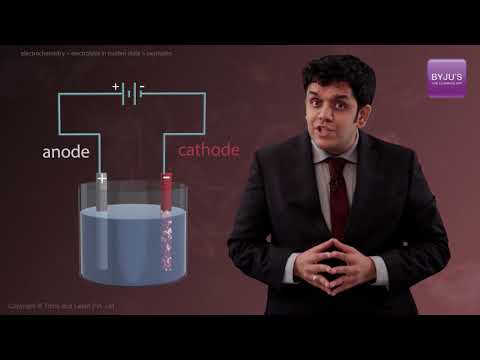 An ionic compound for example, sodium chloride dissolved in water is called an electrolyte because it conducts electricity. Electrolytes are important body constituents because they,

Many biological compounds, for example, carbohydrates are not ionic and therefore have no electrical properties when dissolved in water. Important electrolytes other than sodium and chloride include potassium, calcium, bicarbonate and phosphate.

1. Major Electrolytes Outside the Cell

Calcium and bicarbonate are two other electrolytes found in extracellular fluid. Calcium is the major cation involved in the structure and function of bones and teeth. Calcium is needed to

2. Major Electrolytes Inside the Cell

Potassium, phosphate and magnesium are among the most abundant electrolytes inside the cell.

Electrolytes help to regulate water distribution, govern acid base balance and transmit nerve impulses. They also contribute to energy generation and blood clotting. This table summarizes the functions of each of the body’s major electrolytes.

Electrochemical cells are of three basic types. The electrolytic cell, the galvanic cell, and the concentration cell. All such cells are similar in that they have four basic components. These components are

When cells die their contents spill into the extracellular area and upset the electrolyte balance. In this case, elevated levels of intracellular electrolytes are found in plasma.

Although electrolytes are generally concentrated in a specific compartment, they aren’t confined to these areas. Like fluids, they move around trying to maintain balance and electroneutrality.

Fluid and output acid-base balance hormone secretion and normal cell function can influence electrolyte balance. Because electrolytes and individual imbalances in one electrolyte can affect balance in others.

Even though electrolytes exist inside and outside only the levels outside the cell in the bloodstream are measured. Although serum levels remain fairly stable throughout a person’s life span, understanding which levels are normal and which are abnormal is critical to decide quickly and appropriately to a patient’s electrolyte imbalance.

What are electrolytes in the body?

All electrolytes are sodium, calcium, potassium, chlorine, phosphate, and magnesium; You get them from the food you consume and your drinking fluids. Electrolyte levels can become too small or too high in your body. This can happen when the body changes its amount of water.

Why are electrolytes important?

Electrolytes are compounds in body fluids that make up electrically charged particles (ions). These ions hold the required electrical energy for many functions including muscle contractions and nerve impulse transmission. Numerous body functions depend on electrolytes.

What are common electrolytes?

Electrolytes are found in the human body, and the electrolyte balance in our bodies is necessary for our cells and our organs to function normally. Common electrolytes tested by blood-testing physicians include sodium, potassium, chloride, and bicarbonate.

Is Salt an electrolyte?

Placing a salt in a liquid (such as water) often contributes to an electrolyte solution, as the salt components dissociate in a process called liquid. Electrolytes can also be smelted salts. Molten sodium chloride, for example, is a liquid that can conduct electricity.

Is water an electrolyte?

Simple water, which has a very low ion content, can’t conduct electricity. When a solvent dissociates to form ions in water, it is called an electrolyte, since the solution is a strong electrical conductor.

Glucose, or C6H12O6, is a typical example of a nonelectrolyte Glucose (sugar) dissolves readily in water, but because it does not dissociate in solution into ions, it is called a nonelectrolyte; glucose-containing solutions, therefore, do not conduct electricity. “Nonelectrolyte” says.

Take up a quiz on Electrolytes
Q5