Heck reaction is an organic chemical reaction in which an unsaturated halide reacts with an alkene in the presence of a palladium catalyst and a base. The reaction yields a substituted alkene and is considered to be a coupling reaction.

What is Heck Reaction?

This reaction is also called the Mizoroki-Heck reaction, named after the chemists Tsutomu Mizoroki and Richard F. Heck. For his discovery of this reaction, Richard Heck was awarded the 2010 Nobel Prize in Chemistry, which was shared with Ei-ichi Negishi and Akira Suzuki.

The Heck reaction became the first example of a reaction that formed a carbon-carbon bond following a Palladium(0)/Palladium(II) cycle. The reaction is often employed to obtain substituted alkenes. An example of such a reaction is illustrated below.

The Heck reaction mechanism involves organic palladium compound intermediates. It can be broken down into the following steps:

An illustration describing the mechanism of the Heck reaction is provided below. 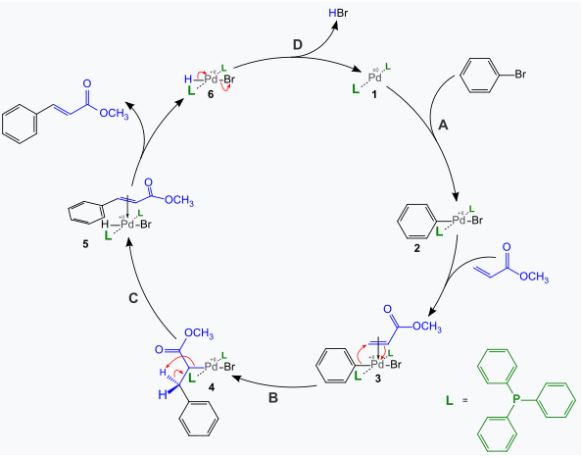 The aryl electrophile can be a triflate or a halide (Br, Cl) as well as vinyl or benzyl halides. It is necessary for alkanes to consist of at least an sp2-C-H bond. Acrylates are ideal because the reaction is enhanced by electron-withdrawing substituents.

The Heck reaction has been modified into the following variations:

The coupling reaction is stereoselectively accompanied by a propensity for trans coupling because, in the rotation step sequence, the bulky organic residue and the palladium halide group move away from each other. The Heck reaction is widely used in the production of sunscreen component octyl methoxycinnamate and naproxen. The naproxen synthesis comprises a coupling between ethylene and a brominated naphthalene compound.

1. What is meant by Heck coupling?

3. Which catalysts are used for Suzuki coupling?

To learn more about the Heck reaction and other organic coupling reactions, such as the Suzuki coupling reaction, register with BYJU’S and download the mobile application on your smartphone.

Take up a quiz on Heck reaction
Q5