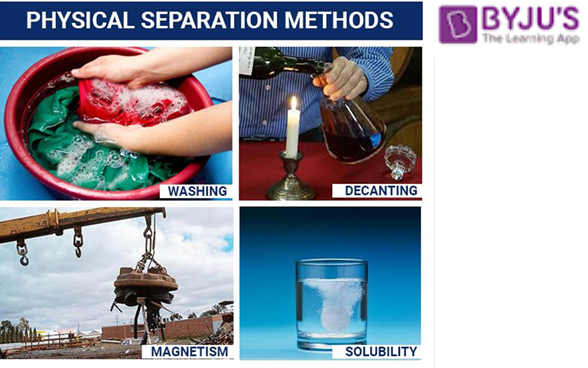 A system of material which comprises two or more different substances mixed together but are not chemically combined is known as a mixture. A mixture is defined as a physical combination of two or more substances whose identities are retained.

The Separation process is used to transform a mixture of substances into distinct products.

Mixtures are the product of the mechanical blending of chemical substances such as elements and compounds, without the formation of any chemical bond or change in the individual components, so that each constituent can retain its original state. Even though there are no chemical changes to the mixture, some alteration is observed in physical characteristics such as melting point and boiling point. The products separated can be different in chemical properties or some of the physical properties like size, crystal modification etc.

Electrolytes and non-electrolytes along with magnet and non-magnetic substances can be separated using this technique of separation under an electrical field or magnetic field.

Insoluble liquids such as noble metals and compounds like silica can be washed with water until whole other impurities getaway. Washing can also be done in organic solvents when the mixture is of soluble impurities and insoluble compounds.

This method is applied when the densities of two liquids that are immiscible in one another are to be separated. A separating funnel helps in separately collecting two liquids. Under solids, the lighter solid can be separated by decanting in a water medium when both solids are not soluble. 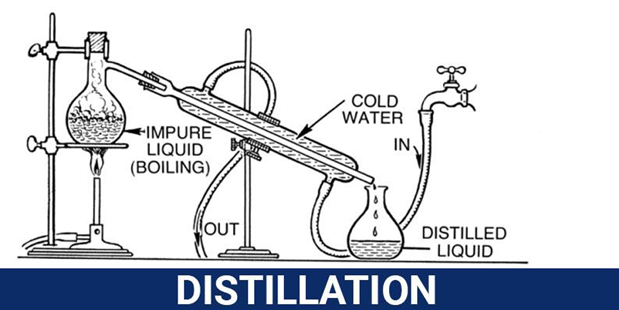 This technique can be applied to separate mixtures of liquids when their boiling points are different. The component with a low boiling point vaporizes first. Mixtures with more than two liquids can also be separated by the same technique but the difference in boiling points has to be at least 20oC between each of them.

Distillation can also be applied to separate dissolved salts from their aqueous solutions. Gaseous mixtures are separated by reducing their temperature and converting all the gases into a liquid state. With the gradual increase in temperatures each liquidised gas gets converted into a gaseous state and can be separated.