Benzene is one of the most commonly known aromatic compounds with chemical formula C6H6.

Benzene is a naturally occurring substance produced by volcanoes and forest fires and present in many plants and animals, but benzene is also a major industrial chemical made from coal and oil.

Benzene is one of the organic and simplest aromatic hydrocarbon and the parent compound of which has about a numerous number of important aromatic compounds. The compound appears like a colourless liquid having a characteristic odour. This compound is primarily utilized for producing polystyrene. It is said to be highly toxic in nature and is also known as a carcinogen; which exposure to this may lead to leukemia. 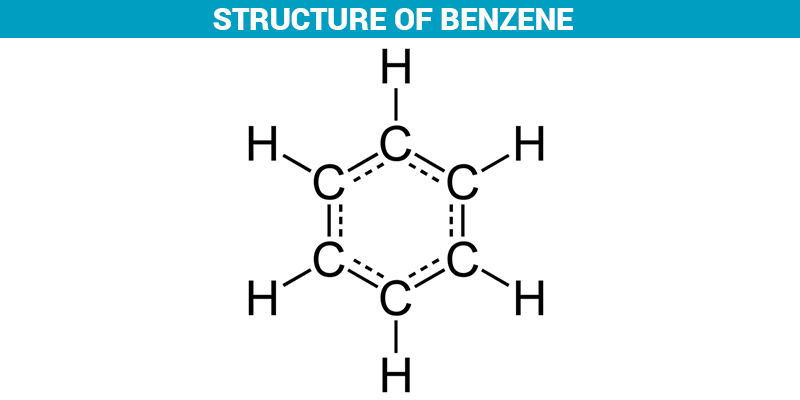 The structural representation of benzene is as shown in the figure below. The chemical formula for benzene is C6H6, i.e it has 6 hydrogen- H atoms and six-carbon atoms and has an average mass of about 78.112. The structure has a six-carbon ring which is represented by a hexagon and it includes 3-double bonds. The carbon atoms are represented by a corner that is bonded to other atoms.

In benzene, the atoms are hydrogens. The double bonds within this structure are mainly separated by a single bond, hence this arrangement is recognized to have conjugated double bonds. A circle is used as an alternative symbol inside the hexagon that is used to represent six pi electrons.

Due to the chemical formula, benzene is categorized as a hydrocarbon. It is a compound consisting of only hydrogen and carbon atoms. The formulas and structure reveal benzene as a pure aromatic hydrocarbon, wherein it is also defined as a compound composing hydrogen & carbon having alternate double bonds in the form of the ring.

Benzene is widely utilized chemicals that are involved in various manufacturing products that we use daily such as plastics, detergents, and rubber.

The study more about Benzene and its properties stay tuned with BYJU’S.

Take up a quiz on structure-of-benzene
Q5