Sericulture is the process of cultivating silkworms and extracting silk from them. The caterpillars of the domestic silkmoth (also called ‘Bombyx mori’) are the most commonly used silkworm species in sericulture. Other types of silkworms (such as Eri, Muga, and Tasar) are also cultivated for the production of ‘wild silks’. An image detailing the different types of silkworms is provided below.

Sericulture is a very important domestic industry in many countries. India and China are the world’s leading producers of silk. The silk output of these two countries combined accounts for over 60% of the global production.

What is Silk Made up of?

Silk is a fiber made up two different proteins – sericin and fibroin. Approximately 80% of silk fiber is made up of fibroin, which is concentrated at the core. This core is surrounded by a layer of sericin (which makes up the remaining 20% of silk).

The presence of pigments (such as xanthophyll) in the sericin layer of the fiber imparts colour to the silk. Each type of silk has a distinct colour, as tabulated below.

What is the Process Followed in Sericulture?

For the production of mulberry silk, the sericulture process follows three primary steps.

Moriculture refers to the cultivation of mulberry plants, whose leaves are used as silkworm feed. These plants can be grown via three different methods:

The stem grafting method is the most commonly used method for mulberry plantation. Here, cuttings that are approximately 22 centimeters in length, containing at least 3 buds, are extracted from the stem of a mature mulberry plant. These cuttings may be directly planted or first kept in nurseries and then transplanted.

The mulberry leaves can be harvested from the plants via the following methods:

It is interesting to note that 1 kilogram of mulberry leaves can feed approximately 50 silkworms (from the egg stage to the cocoon stage).

In sericulture, the silkworm rearing process begins with the laying of eggs by the female silk moth. Typically, 300-500 eggs are obtained from one female silk moth. These eggs (laid on a paper/cardboard sheet) are then disinfected with the help of a 2% formalin solution.

A feeding bed is prepared on a rearing tray by sprinkling chopped mulberry leaves onto it. The hatched larvae are transferred into this tray via a process known as brushing. In order to maintain humidity, foam strips are soaked in water and placed on the tray.

The silkworm larvae initially have a good appetite. As they grow, their appetite slowly diminishes until their active stage. At this stage, the silkworm eats enthusiastically until its final feeding stage.

After reaching maturity, the larvae begin searching for hospitable places to begin their pupation. At this stage, the body of the silkworm shrinks and becomes translucent. These mature larvae now wrap themselves in a cocoon by secreting saliva from the two salivary glands on their heads. This saliva solidifies and becomes silk when it comes in contact with air.

Generally, the cocoon is spun in 2-3 days. However, some varieties of silkworm can take up to 4 days to spin their cocoons.

Inside the cocoons, the larvae undergo metamorphosis and turn into pupae. The harvesting of silk from these cocoons is the final stage of sericulture. First, the pupae inside the cocoon are killed by boiling the cocoon and exposing it to steam and dry heat. This process is called stifling.

Now, the silk filaments are removed from the dead cocoon via a process called reeling. When the cocoons are placed in boiling water for approximately 15 minutes, the adhesion of the silk threads reduces, enabling the separation of individual filaments. These filaments are twisted into a thread with the help of a series of guides and pulleys. This silk is then re-boiled in order to improve its luster. 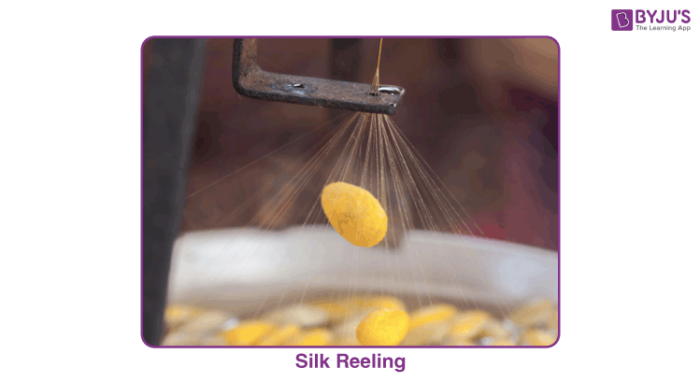 One thread of silk contains approximately 50 silk filaments. However, over 900 meters of filament can be obtained from a single cocoon. Thus, raw silk is obtained from the silkworm and the sericulture process is completed.

What are the Challenges Faced in Sericulture?

Silk farmers practicing sericulture are met with several challenges that could potentially destroy their harvest. They are also prone to many health hazards. Silkworms are vulnerable to several diseases such as pebrine and flacherie. Also, several pests threaten the healthy growth of silkworm larvae. Some important challenges faced in sericulture are listed below.

The Story of the Silk Worm 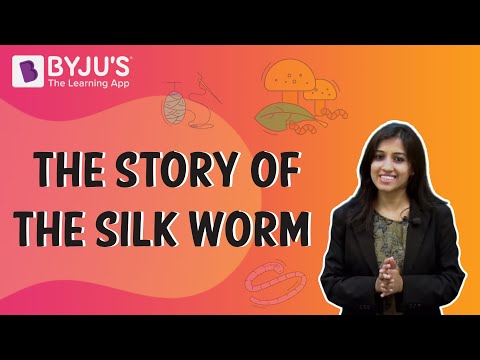 To learn more about sericulture and other related concepts, such as the life cycle of the silkworm, register with BYJU’S and download the mobile application on your smartphone.

Take up a quiz on Sericulture
Q5