Xylene is an organic chemical compound. It is also known as dimethylbenzene or Xylol. It is one of the three isomers of dimethyl benzene. It consists of a central benzene ring attached with two methyl groups as substituents.

In the year 1850, Xylol was first isolated by a French chemist Auguste Cahours. Xylol is a colourless, clear, flammable liquid. It is produced by catalytic reforming as well as by coal carbonization. It also occurs naturally in crude oil, aircraft fuels, and gasoline. The mixture of xylene is slightly greasy and has a sweet smell, usually encountered as a solvent.

Commercially obtained Xylene is a colourless, flammable, non-viscous, toxic liquid. It does not dissolve in water but is miscible with various organic liquids. At an industrial level xylenes are synthesized by the process of methylation of benzene and toluene. The obtained Xylol contains 40 to 65% of m-xylene and approximately 20% of o-xylene, 20% of p-xylene and 20% of ethylbenzene. 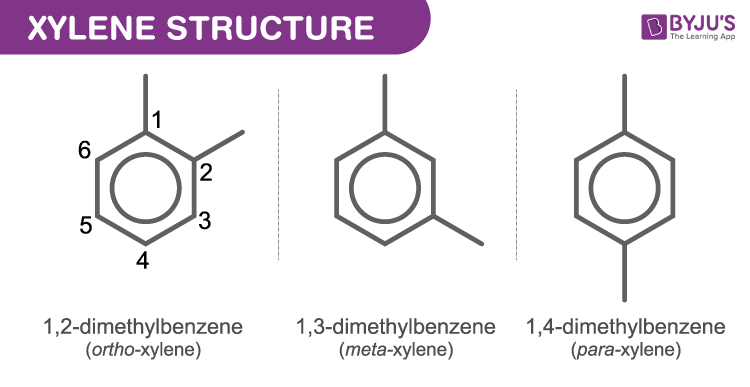 Inhaling xylene vapour leads to depression of the central nervous system, resulting in symptoms such as headache, vomiting, nausea and dizziness. It also leads to hearing disorders. When it comes in contact with the skin it causes irritation.

What are the uses of xylene?

The para isomer of xylene is one of the principal precursors to dimethyl terephthalate and terephthalic acid. Both these compounds are monomers that are used in the production of polyethylene terephthalate (often abbreviated to PET). This compound is also used widely as a solvent. In chemical laboratories, reaction vessels are usually cooled with the help of dry ice and xylene baths. This compound is also crucial in the production of xylene chlorides and xylene bromides.

Yes, xylene is highly toxic to human beings. This compound is also known to be flammable. It can be noted that inhalation of xylene can result in the depression of the central nervous system (often abbreviated to CNS) in human beings and most other animals. Common symptoms that accompany the inhalation of xylene include dizziness, headaches, nausea, and, in some cases, vomiting. Slowed reaction times also manifest in some patients who have ingested or inhaled large quantities of xylene.

How is xylene produced?

Xylene and xylene compounds are usually formed by the toluene and benzene methylation. Commercial or laboratory grade xylene that is produced typically contains around 40-65% of m-xylene and up to 20% of o-xylene, p-xylene, and ethylbenzene respectively. The ratio of isomers can be changed to support the highly valued p-xylene through the proprietary UOP-Isomar process or by the trans alkylation of xylene with trim ethylbenzene itself. It can be noted that the majority of these conversions are usually catalysed with the help of zeolites.

Learn more about the chemical behaviour and importance of C8H10 with the expert faculties at BYJU’S.

Test Your Knowledge On Xylene!
Q5