(C8H8)n is a synthetic aromatic hydrocarbon polymer with the chemical name Polystyrene.

Polystyrene is a hard, brilliantly transparent, stiff resin. It is produced by the polymerization of styrene and is the most widely used plastic. At room temperature, the thermoplastic polymer is a solid but when heated above 100 °C it flows. It becomes rigid again when it cools down. Polystyrene is insoluble in water.

Polystyrene is compound that is non-biodegradable with a couple of exceptions. It is easily dissolved by many aromatic hydrocarbon solvents and chlorinated solvents. It is widely used in the food-service industry as rigid trays, containers, disposable eating plates, bowls, etc. 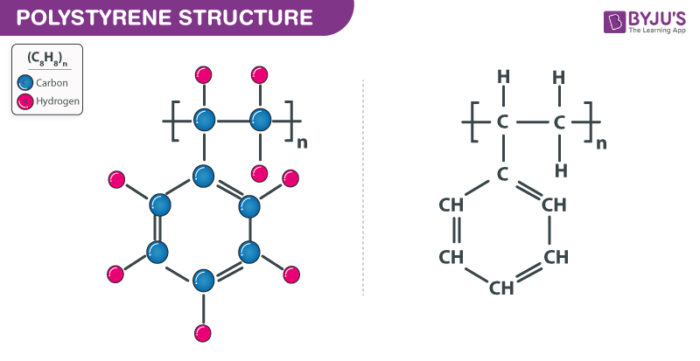 Polystyrene (PS) plastic is a thermoplastic that is naturally transparent and available both as a standard solid plastic and in the form of a rigid foam material. PS plastic is widely used in a number of consumer product applications and is also particularly useful for commercial packaging.

Where does polystyrene come from?

Polystyrene is one of the best-known synthetic polymers there are polyethene, polypropylene and polyester among others. Styrene, the liquid hydrocarbon from which EPF is made, was extracted from storax balsam in the late 19th century, which comes from a tree in Asia Minor called the Oriental sweet gum.

Is polystyrene toxic to humans?

Polystyrene contains the toxic substances Styrene and Benzene, possible carcinogens and neurotoxins that are harmful to humans. In fact, hot foods and liquids begin a partial breakdown of the Styrofoam allowing certain contaminants to be absorbed into our bloodstream and tissues.

Why is polystyrene useful?

Polystyrene is the packaging material of choice because it is light and cool. Snapping in half or collapsing is easy but, crucially, it is high in compression and thus protects fragile objects if dropped or crushed. Polystyrene is also a very strong insulator which means that it accumulates electrical charge easily.

Is polystyrene polar or non-polar?

Because polystyrene contains only carbon hydrogen bonds, it is non-polar and can dissolve only in non-polar solvents, much as dissolves. The general starch structure is depicted below. Starch contains bonds of oxygen carbon and oxygen hydrogen which make it a polar molecule.

Discover more about the physical and chemical properties, structure and uses of (C8H8)n from the experts at BYJU’S.

Test Your Knowledge On Polystyrene!
Q5