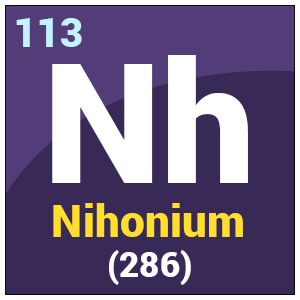 Other Properties of Nihonium

Yes. Nihonium is toxic due to its radioactivity.

In which year was Nihonium discovered?

Which is the most stable isotope of Nihonium?

What is the half-life of Nihonium-286?

Element Nihonium belongs to which block in the periodic table?

It is a p-block element.