The Dassault Rafale Jet is a multirole fighter jet designed and built by Dassault  Aviation, a French aircraft manufacturer. The name Rafale means ‘gust of wind’ or ‘burst of fire’ in a military sense.

This article will give details about the Rafale fighter jet within the context of the IAS Exam.

Origins of the Rafale Fighter Jet

Towards the closing decades of the Cold War in the 1970s, the French military was looking to replace their current fleets of aircraft. To mitigate development coasts ad earn a hefty profit, France signed deals with the United Kingdom, Germany, Italy to produce a multirole fighter jet, the Eurofighter Typhoon.

However, multiple disagreements over intellectual property rights, workshare and difference in requirements led France to back out of the deal and pursue its own aircraft development programme.

The French government released a tender where they invited major defence contractors to demonstrate their technology. The tender was awarded to Dassault in July 1986 as a part of an eight-year-flight-test programme, laying the groundwork of the Rafale fighter jet project.

The Rafale is unique in the sense that it is the only aircraft of its time to be solely built by France, that involved major French defence contractors, such as Dassault and Thales.

For a more clear and interactive understanding of the Rafale Fighter jets, IAS aspirants can refer to the video given below and get detailed information regarding its origin, features, benefits for India, and development prospects: 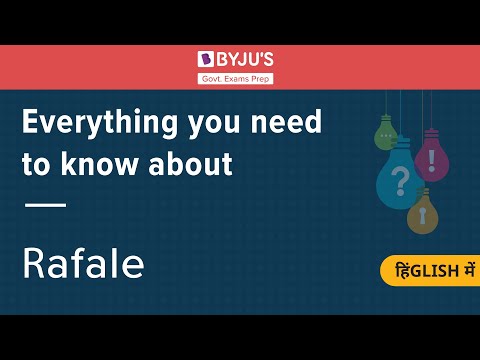 Acquisition by the Indian Airforce

In order to boost its air superiority parameters, the Indian Force placed orders for Rafale jets in April 2011, following a technology demonstration during that year. Following multiple rounds of negotiations between the French and the Indian governments, an agreement was reached on 23 September 2016 between Indian Defence Minister Manohar Parrikar and his French counterpart Jean-Yves Le Drian. The agreement stipulated that 36 Rafales would be delivered to the Indian Air Force for €7.8 billion with an option for 18 more to be delivered.

To counter the latest versions of the Pakistani F-16s, the Indian government wanted their Mig-21 fleet to be replaced by the Rafale jet. Ahead of the Indian Air Force Day on 8 October 2019, a ceremony was conducted for the first formal hand over of the Rafale at the Dassault’s manufacturing facility in Bordeaux. The aircraft had the tail number “RB-001” to mark IAF chief-designate Air Chief Marshal RKS Bhadauria’s role in the 2016 deal.

Delivery of 36 Rafales started on 27 July 2020 with first 5 Rafales delivered to Indian Airforce from France.

Specifications of the Rafale Fighter Jet

The combat specifications of the Rafale fighter jet is given in the table below:

Variations of the Rafale Jet

The variations of the Rafale Jet is given in the table below:

How many Rafale jets India have?

With three more Rafale fighter jets, the IAF will now have eight Rafale jets in service. India had signed an inter-governmental agreement with France to procure 36 of these aircraft at a cost of Rs 59,000 crore.

What is unique about the Rafale Jet?

Rafale is a twin-jet combat aircraft manufactured by Dassault Aviation and is capable of carrying out a wide range of short and long-range missions. It can be used to perform ground and sea attacks, reconnaissance, high-accuracy strikes and nuclear strike deterrence.