The concept of constitutionalism has been recognised by the Supreme Court in Rameshwar Prasad v. Union of India. The Court stated, “The constitutionalism or constitutional system of Government abhors absolutism – it is premised on the Rule of Law in which subjective satisfaction is substituted by objectivity provided by the provisions of the Constitution itself.”

In IR Coehlo v. State of Tamil Nadu, the Court held that Constitutionalism is a legal principle that requires control over the exercise of governmental power to ensure that the democratic principles on which the government is formed shall not be destroyed. Chandrachud, CJ, in Minerva Mills case observed, – “The Constitution is a precious heritage and, therefore, you cannot destroy its identity”.

Constitutionalism is an amalgamation of the following underlying principles: 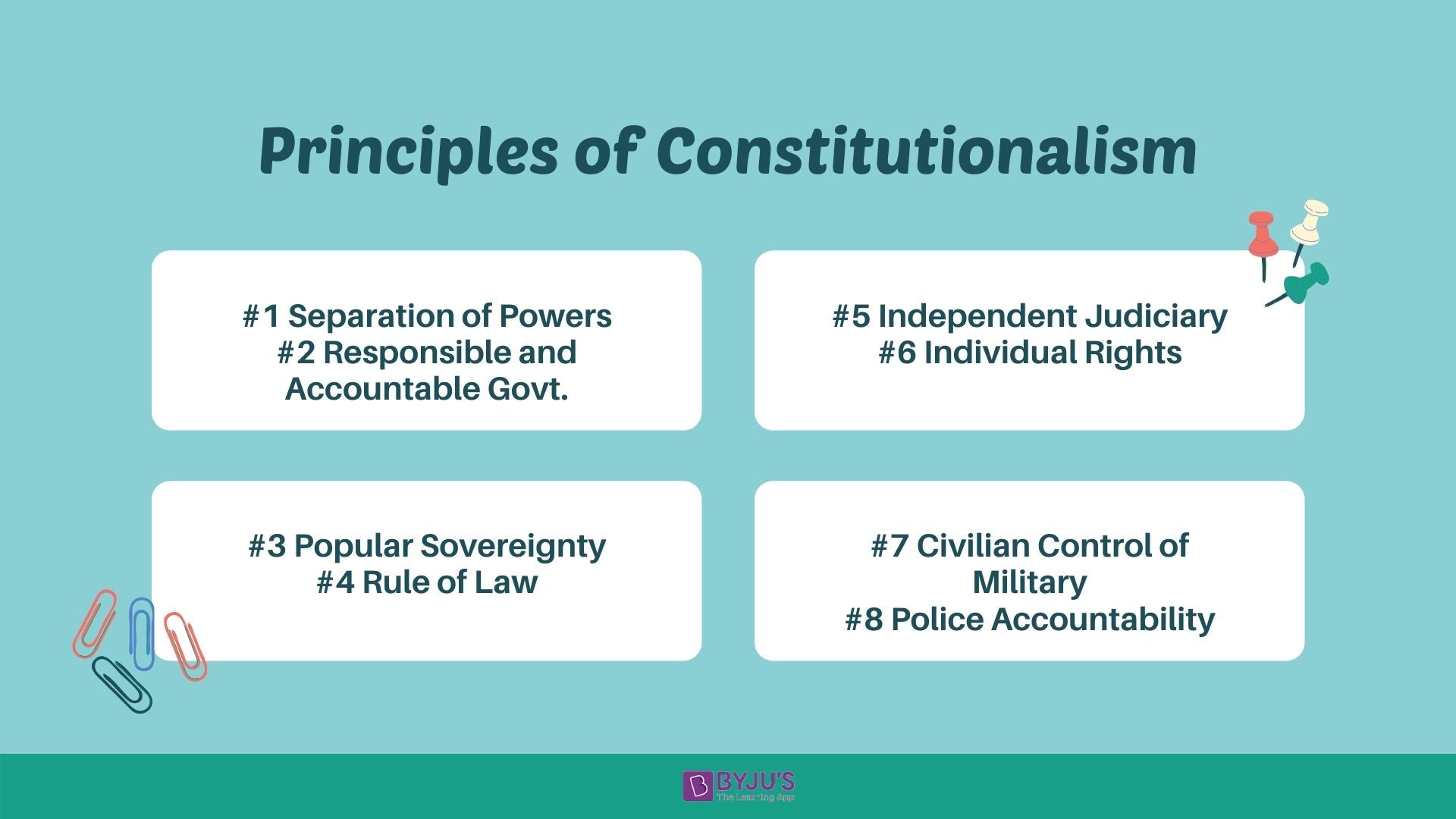 Separation of powers divides the mechanism of governance into three branches i.e., Legislature, Executive and the Judiciary. This not only prevents the monopolization of power, but also creates a system of checks and balances. As this division of powers is in the Constitution itself, this becomes an effective tool for ensuring Constitutionalism.

In a democratic setup, the government is elected so that it can serve the people who help elect it. It is in this sense that the electors have a right to demand accountability and answers from their government. Therefore, when the government fails the expectations of the electorate, the authorization to govern is revoked by voting them out.

The concept of popular sovereignty lays down that the government derives its legitimacy from the people. No corporate body, no individual may exercise any authority that does not expressly emanate from it. Even though there is a certain sovereign entity that is empowered to govern, ultimate sovereignty resides in the nation. The power of such a sovereign entity emanates from the public.

The presence of rule of law means that the government does not belong to men but to the laws. Dicey lays down three essential components of Rule of Law:

The rights of the individual shall be at the highest pedestal for constitutionalism to thrive. The constitutional setup in India gives these rights the importance that they deserve by engraving them in Part III of the Constitution. These individual rights have not only been protected by the courts but have also been interpreted in a manner where their effect and implementation has broadened.  The enforcement of these rights is ensured by the Constitutional Courts i.e. the Supreme Court and the High Courts.

Civilian control of the military

Apart from these features, constitutionalism envisages that the control of the military should be in the hands of a civilian government so that the military does not interfere in the democratic decision making or attempt a military coup.

Constitutionalism also envisages that police while performing its duties shall uphold the rights, freedoms and dignity of the individuals, the same can be ensured by bringing the police under the control of laws and courts.

The concept of constitutionalism has existed and thrives in all functioning democracies. However, over the years the Governments have learned to use government apparatus for their own benefits instead of benefitting the citizens. The government by giving backdoor entries to corporate interests in policy-making has vitiated the policymaking process whose primary aim is the welfare of the larger population. The very document that was adopted to ensure the rights of individuals is being used to suppress and disenfranchise them.

The problem is that the Constitution cannot interpret itself and has to be interpreted by the men who hold power. The institutions that were the bulwark of Constitutionalism are either crumbling or have been effectively rendered weak and incapable. Checks and balances have been diluted to a point where their importance is merely academic. The criminalisation and influence of money power into the corridors of politics and governance have worsened an already volatile system. The frustrations that are building up due to the apathy of the government in utter disregard of constitutionalism are extremely dangerous and this slide needs to be stopped.

Also read about the major features of the Indian Constitution here.

Q 1. What is Constitutionalism in India?

Q 2. What are the principles of Constitutionalism?

Ans. The principles of Constitutionalism include Separation of Powers, Responsible and Accountable Government, Popular Sovereignty, Independent Judiciary, Individual Rights and Rule of Law.