Sakas belonged to Scythian Ethnic stock. The movement of Sakas into north-western India came to heels of their displacement from the plains of Syr Darya (Jaxartes) by the Great Yueh Chi tribe (Chinese Tribe) in the 2nd century BCE. Aspirants should know that the term, ‘Sakas’ is interrelatedly used with ‘Shakas’ and ‘Indo-Scythians;’ meaning of all is the same.  Learning about Shakas is important for the IAS Exam. This article will talk about Shakas while providing important facts for UPSC.

Candidates can refer to articles related to Shakas for UPSC in the table below:

After the decline of the Mauryan Empire, northwest India was constantly under attack from various invaders from Central and West Asia. The Indo-Greek rule lasted from about 180 BC till about 55 BC. The Sakas (also written Shakas), alternatively known as Indo-Scythians, invaded northwest India in the first century BC onwards. 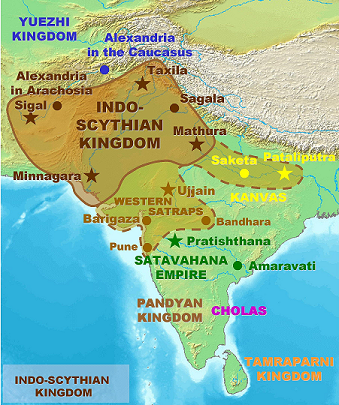 The decline of the Shakas

Who defeated the Shakas in India?

Chandragupta II defeated the Saka king Rudrasimha III and annexed his kingdom and assumed the title Vikramaditya. This brought an end to Saka-Kshatrapa rule in western India and added the regions of Gujarat, Kathiawad and west Malwa to the Gupta empire.

What race were the Scythians?

Scythian, also called Scyth, Saka, and Sacae, member of a nomadic people, originally of Iranian stock, known from as early as the 9th century bce who migrated westward from Central Asia to southern Russia and Ukraine in the 8th and 7th centuries bce.

Aspirants can refer to NCERT notes on Ancient History for UPSC for other important articles.