Origin & Development of the Satavahana Dynasty

The Sunga dynasty came to an end around 73 BCE when their ruler Devabhuti was killed by Vasudeva Kanva. The Kanva dynasty then ruled over Magadha for about 45 years. Around this time, another powerful dynasty, the Satavahanas came to power in the Deccan area.

The term “Satvahana” originated from the Prakrit which means ” driven by seven” which is an implication of the Sun God’s chariot that is driven by seven horses as per Hindu mythology.

In the northern region, the Mauryas were succeeded by the Sungas and the Kanvas. However, the Satavahanas (natives) succeeded the Mauryas in Deccan and in Central India.

The Satavahana Dynasty map is given below: 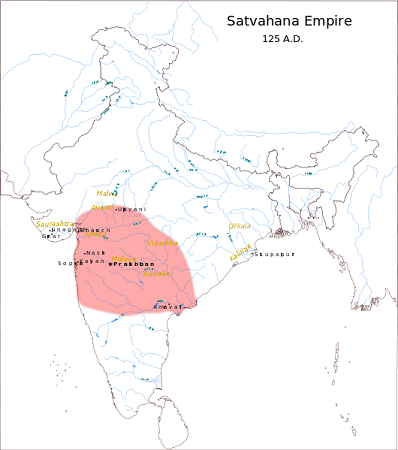 Important Rulers of the Satavahana dynasty

The administration of the Satavahana dynasty was entirely based on the Shastras, and it had the following structure:

The inscription of the ruler Guatamipurna Satakarni throws some light on the bureaucratic structure of administration. However, clarity on the detailed structure is still awaited by historians.

Agriculture was the backbone of the economy during the rule of Satavahana kings. They also relied on trade and production of various commodities within and outside India.

Some important points related to Satavahan coinage are mentioned below:

The official language of the Satavahanas was Prakrit, though the script was Brahmi (as was the case in the Ashokan times). Political inscriptions also threw some light on the rare use of Sanskrit Literature.

The material culture of the Deccan under the Satavahanas was a fusion of local elements (Deccan) and northern ingredients.

In the Satavahana phase, many temples called chaityas and monasteries called viharas were cut out of the solid rock in the northwestern Deccan or Maharashtra with great precision and patience.

The Decline of the Satavahanas

Who was the most powerful kings of the Satavahana dynasty?

The most powerful ruler of this dynasty was Gautamiputra Satakarni. His reign marked the beginning of the Saka–Satavahana struggle, which became a major feature of politics in the Deccan.

Who was the founder of the Satavahana Dynasty?

The founder of the Satavahana Dynasty was King Simuka Satavahana.