People come to cities in search of employment, profit, better lives, quality education, larger markets and similar prospects which their native environment lack or show little chance of providing in future as well. With constant mobility of people, the cities become mobile as well. Influx from rural to semi-urban, semi-urban to urban, and urban to metro cities is a continuous cycle. This follows a multitude of problems for the individual as well as for the community. Limited resources and stress on the existing infrastructure lead to investment, which in turn gives way to more industries, and inevitably, bringing even more people to the cities. This leads to expansion of cities which has its own limits.

Carving out extended arm and wings of the cities from the rural hinterlands has its own merits and demerits. With these limited choices, cities have a collective challenge to meet the ever- growing demands of a burgeoning population in a sustainable manner and remain the growth centre to realise the vision of New India.

The idea is to de-stress the cities and let them bring world-class infrastructure, amenities, and ease of living to their people. There is a need for complementing public amenities of similar nature for the marginalised city dwellers, as well as in the rural regions with quality, affordable services leading to a reverse migration in a positive sense.

Atal Mission for Rejuvenation and Urban Transformation (AMRUT) has been initiated by the Government of India to address the challenges of water supply and sewerage/septage in cities across the country, providing non-motorised transport and public amenities, bringing reform through 54 milestones and to harness the associated opportunities of economic growth.

Basic infrastructure will play a vital role in enabling the cities to adequately provide civic service to improve the quality of life of citizens in becoming true engines of economic growth.

thus improving the quality of life for all, especially the poor and the disadvantaged.

AMRUT: Aligned with the needs of Urbanising India

Some of the significant reforms are as under:

However, more than 3,500 smaller cities/towns out of 4,378 statutory towns at present are not covered under any central scheme for water supply and Faecal Sludge and septage Management infrastructure. Hence, it is imperative to take forward the achievements of this Mission to these smaller cities as well.

Slums in the modern cities are usually looked upon as places having lesser aesthetic value in urban planning. In reality, they are self-sustaining micro-cities within larger cities helping sustain the industries as well as households through the services they provide. Slums could be classified based on their social, economic and legal status. Therefore, implementing a common slum policy does not represent a good use of resources.

FACT- Slums in each city have a variety of living conditions that fall along the continuum. People’s need vary at different points of the continuum. Standardised slum policies are, therefore, not helpful.

MISCONCEPTION: Official notification is required for getting basic services and saleable property titles.

Improving their prospects for upward mobility requires progressively reducing the risk and vulnerability that are induced by living and working in informal conditions.

Growth that is currently taking place is accompanied by informalisation, e.g., sub-contracting in the production process and various other mechanisms that tend to leave labour with less bargaining power. The informalisation process is feared to involve substantial welfare losses and deterioration in terms of governance. However, in the face of inadequate livelihood opportunities in the rural areas, even the urban informal sector, which is grossly characterized by low productivity, tends to attract migration. This in turn has serious challenges in terms of urbanisation. Though in the Indian context rural-urban migration rates are moderate, rural-to-large city population-flow has always been alarming. Thus, city growth, informal sector employment, and low living standards including slum inhabitation involve considerable overlaps.

Once the largest cities exhaust the economic opportunities the second rank cities come up to replace them in terms of investment, growth, and employment generation. However, for them to take over the lead role, a proper coordination between the state and those who have a thorough understanding of the growth dynamics of the urban space is essential. In the Indian context, a clear-cut initiative for urban investment or planning is yet to emerge on the basis of the growth potential of different cities and towns with an economic-cum-geographic perspective.

Mobility is increasingly circular, semi or non-permanent. Although a bulk of it is regional, many stream of migration are also long-distance and interstate. This dynamic situation of mobility is at variance with public policies in cities that are being transformed by the presence of and contribution of these migrants. This gap in public policy compels migrants to find solutions outside the formal system. Such patterns generate a vicious cycle in which both cities and migrants get trapped.

Changing Scale and Forms of Mobility in India

How does Mobility Transform Places?

It is therefore essential to move away from the current State Govt.-based policy onus and equip local governments in terms of capacity to cognize such issues, collect data, and to possess the powers and resources to respond to dynamic phenomena such as migration.

The Government of India is dedicated to achieving the highest standards of health and well-being for the nation. Immunisation programme is a critical component of government’s commitment towards Universal Health Coverage. It is integral to India’s efforts of reducing the burden of vaccine preventable diseases and achieving universal care for children.

By building on successes from the past, learning from the challenges and consolidating efforts across the stakeholder groups, the country can fulfil its aim of attaining a disease free India.

With pollution becoming a seasonal nightmare across a large part of India, our cities need additional lungs in the form of green covers. The State of Telangana has taken such an initiative using technology and planning to leave greener footprints for the future generations through natural forest restoration.

A systematic approach of forest management to sustain the ecological balance and stability of the forest is gaining momentum in India. Innovative reforestation approaches are explored to increase the forest cover.

‘Telanganaku Haritha haram’, is a flagship programme of Telangana to create an entire forest instead of mere plantation.

A successful YNF model can be revolutionary intervention towards increasing the greenery, climate amelioration and wasteland development.

Pollution by stubble burning has become an annual phenomenon in large parts of northern India. Rice growing states including Punjab, Haryana, Uttar Pradesh and Delhi add to the problem of stubble burning.

Dealing with the Problem of Stubble Burning:

Stubble burning has to be stopped. The problem should be dealt sympathetically with the alternative measures, and cooperative model stands out to be the most appropriate approach to address this problem, which is more viable and sustainable.

The Indian consumer market has gone through a drastic transformation over the last two decades, with the advent of digital technologies, internet, rapid penetration of e-commerce, smart phones and cloud technologies. The Consumers Protection Act (CPA), 1986 being the foremost legislation for protecting the rights of the consumers had become archaic and does not cover rapid change in the consumer marketplaces, especially those dealing with online shopping, teleshopping, product recall, unsafe contracts, and misleading advertisements. Therefore, it was felt to replace it with the Consumer Protection Act, 2019.

Some of the highlights of the Consumers Protection Act, 2019 are:

The consumer’s protection Act, 2019, with its innovative change, would help in empowering consumers and provide justice to the needy in time.

Chapter 10: Map of UT of Jammu & Kashmir and UT of Ladakh 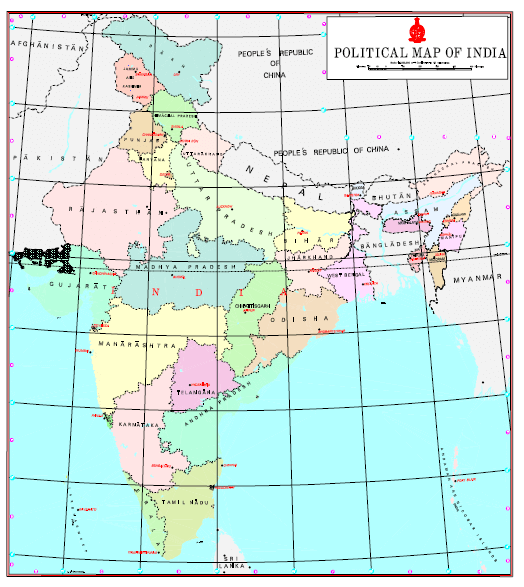