The fishing cat (Prionailurus viverrinus) is a medium-sized wild cat of South and Southeast Asia.

It is mostly found in wetlands, swamps and mangroves.

The fishing cat is the state animal of West Bengal; and is listed as ‘Vulnerable’ in the IUCN Red List.

Characteristics and Habitat of the Fishing Cat

The fishing cat’s fur is yellowish-grey with plack spots and lines. It also has two rows of spots around the throat. The short and rounded ears are set low on the head and the back bear a white spot. The tail is short, less than half the length of the body

A short, dense layer provides a water barrier and thermal insulation, while another layer of protruding long guard hairs provides its pattern and glossy sheen. 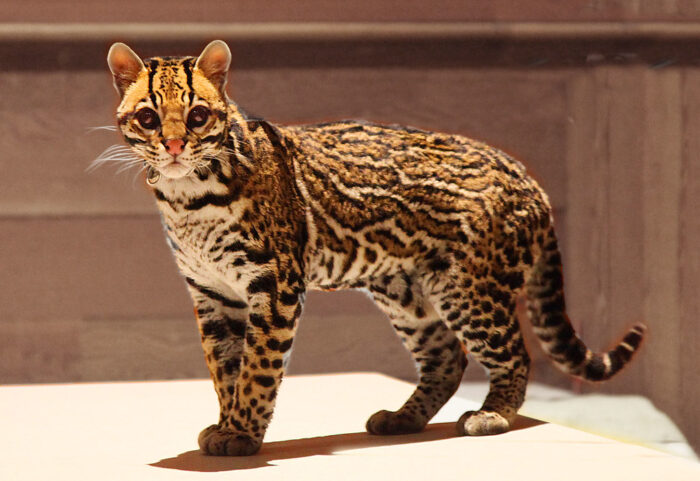 Further characteristics of the Fishing Cat is given in the table below:

In India, its presence has been documented in:

Behaviour of the Fishing Cat

The fishing cat is mainly active at night as in nocturnal. It is usually found near water bodies and is able to swim at long distances. Adult male and female fishing cats are solitary in nature.

Their main prey is fish; scat collected in India’s Keoladeo National Park revealed that fish comprises approximately three-quarters of their diet, with the remainder consisting of birds, insects, and small rodents. Molluscs, reptiles including snakes, amphibians and carrion of domestic cattle supplement their diet.

Conservation of the Fishing Cat

The fishing cat is included on CITES Appendix II, and protected by national legislation over most of its range.

Its survival depends on protection of wetlands, prevention of indiscriminate trapping, snaring and poisoning.

In areas where habitat degradation is a major concern, such as coastal Andhra Pradesh, NGOs are working to slow habitat conversion in collaboration with local villagers. Part of this work involves creating alternative livelihood programs that allow villagers to earn money without damaging natural habitats.

Since 2016, the fishing cat has been listed as Vulnerable on the IUCN Red List. Fishing cat populations are threatened by destruction of wetlands and have declined severely over the last decade.

How many fishing cats are left?

There are less than 10,000 Fishing Cats left in the world.Its IUCN status is vulnerable.

Where does a fishing cat live?

Fishing cats are usually found in wetland areas, such as swamps, marshes and mangrove forests.