Current international events and news that affect the world deeply are very important for the UPSC IAS exam. ISIS has been in the news for quite some time, and recently, its leader Al-Baghdadi was killed. In this article, you can read all about the background of this event, about the organisation ISIS and the resistance to it led by the US, for the IAS exam.

While terrorism is widely distributed geographically, most events are concentrated in a small number of countries committed by an array of groups; and disproportionately affecting Muslim populations. Although there have been many groups and organisations that have been actively propagating fundamentalist ideals, the apocalyptic rise of the Islamic State in Iraq and Syria under the leadership of Abu Bakr Al Baghdadi made terrorism an invincible challenge for authorities and nation-states all across the globe.

However, the killing of Abu Bakr Al Baghdadi, by US Delta Forces, near Idlib province of Syria is a significant blow to the world’s most fearsome terrorist group.

There had been several attempts by the United States and other nations in the region like Russia, Iran, Syria, and Israel among others to eliminate Abu Bakr Al Baghdadi, but his disguising ability and safe havens provided by the topography and non-state actors of the subcontinent gave him an upper hand. Nevertheless, following years of efforts and intelligence gathering by several ground-level cadres, the American forces were able to kill him.

ISIS started as an Al-Qaeda splinter group, also called the Islamic State in Iraq and Syria or Islamic State in Iraq and Levant (ISIL). The ISIS aimed to create an Islamic state called a caliphate across Iraq, Syria and beyond. The group implements Sharia Law, to establish a society that mirrors the region’s ancient past. ISIS is known for killing thousands of people and carrying out public executions, crucifixions and other acts.

Abu Bakr Al-Baghdadi and his group became directly involved in ISIL’s atrocities and human rights violations. These include the genocide of Yazidis in Iraq, extensive sexual slavery, organized rape, floggings, and systematic executions. He directed terrorist activities and massacres. He embraced brutality as part of the organization’s propaganda efforts, producing videos displaying sexual slavery and executions via hacking, stoning, and burning. In 2014, ISIL announced the establishment of a worldwide caliphate. Al-Baghdadi was named its caliph, to be known as “Caliph Ibrahim,” and the Islamic State of Iraq and the Levant was renamed the Islamic State (IS). 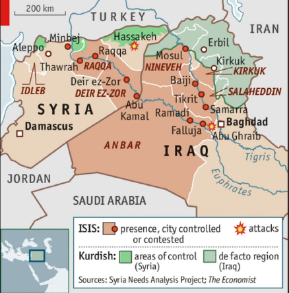 Read about the proposed Global Convention on Terrorism in the linked article.

From the beginning, ISIS took considerable security measures to obscure Baghdadi’s identity. Within the organisation, even high-level leadership rarely saw Baghdadi in person; even in such rare instances, he appeared with his face covered—practices that partially account for his nickname “the Ghost.” Moreover, ISIS propaganda deliberately downplayed the figurehead of Baghdadi—unlike much of al-Qaeda’s communications, in which the publicity-hungry leader serves as the charismatic face of the organizational cause.

Al Baghdadi had a charismatic appeal amongst his followers. He united several splinter groups in the Middle East in order to expand the reach and manpower of his organisation. Under his leadership and guidance, the ISIS rose to prominence as the transnational terror organisation prompting the United Nations to designate him as a global terrorist.

The tactical modes of action taken by ISIS under Abu Bakr Al Baghdadi were;

However, stern actions by several nations especially the USA and other western countries and resilience shown by nations like India towards ISIS ideology and influence have led to its downfall. Moreover, the united front presented by countries in West Asia and the rallying of several armed groups comprising Kurdish militias and Syrian Democratic Forces against Islamic State resulted in its territorial and ideological waning. 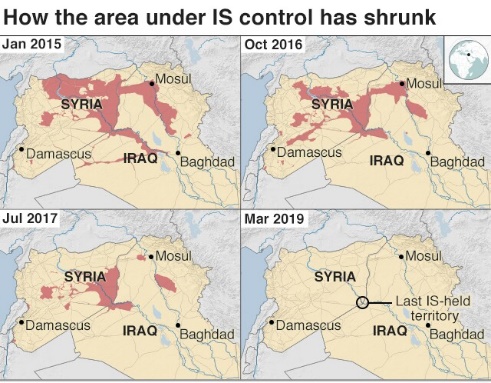 Impact of Baghdadi’s death on the subcontinent

Although it has been touted that with the end of Baghdadi, the Caliphate and the domination of ISIS would come to an end, there are also counter claims that it may give rise to new successors to the ISIS movement. Nevertheless, multifarious impacts could occur as a result of his death.

You can visit the UPSC Syllabus page to familiarise yourself with the exam pattern. For more preparation materials and articles, visit the links given in the table below: