Many Supreme Court judgements have changed the face of Indian polity and law. These landmark SC judgements are very important segments of the UPSC syllabus. In this series, we bring to you important SC judgments explained and dissected, for the benefit of IAS aspirants. In this article, you can read all about the Maneka Gandhi case.

Get a list of landmark SC judgements for the UPSC exam in the linked article.

The landmark ruling in Maneka Gandhi versus Union of India, which stands as a bulwark of the Right of Personal Liberty granted by Article 21 of the Constitution, started when the passport of the petitioner in this case, was impounded by the authorities under the provisions of the Passport Act. This arbitrary act of impounding the passport eventually led to the pronouncement of a unanimous decision by a seven-judge bench of the apex court comprising M.H. Beg (CJI), Y.V. Chandrachud, V.R. Krishna Iyer, P.N. Bhagwati, N.L. Untwalia, S. Murtaza Fazal Ali and P.S Kailasam.

The petitioner Maneka Gandhi’s passport was issued on 1st June 1976 as per the Passport Act of 1967. On 2nd July 1977, the Regional Passport Office (New Delhi) ordered her to surrender her passport. The petitioner was also not given any reason for this arbitrary and unilateral decision of the External Affairs Ministry, citing public interest.

The petitioner approached the Supreme Court by invoking its writ jurisdiction and contending that the State’s act of impounding her passport was a direct assault on her Right of Personal Liberty as guaranteed by Article 21. It is pertinent to mention that the Supreme Court in Satwant Singh Sawhney v. Ramarathnam held that right to travel abroad is well within the ambit of Article 21, although the extent to which the Passport Act diluted this particular right was unclear.

Issues Before the Court

Arguments of the petitioners:

Get a list of Polity Questions for UPSC Mains in the linked article.

Contentions of the respondents:

This immensely important judgment was delivered on 25th January 1978 and it altered the landscape of the Indian Constitution. This judgment widened Article 21’s scope immensely and it realized the goal of making India a welfare state, as assured in the Preamble. The unanimous judgement was given by a 7-judge bench. 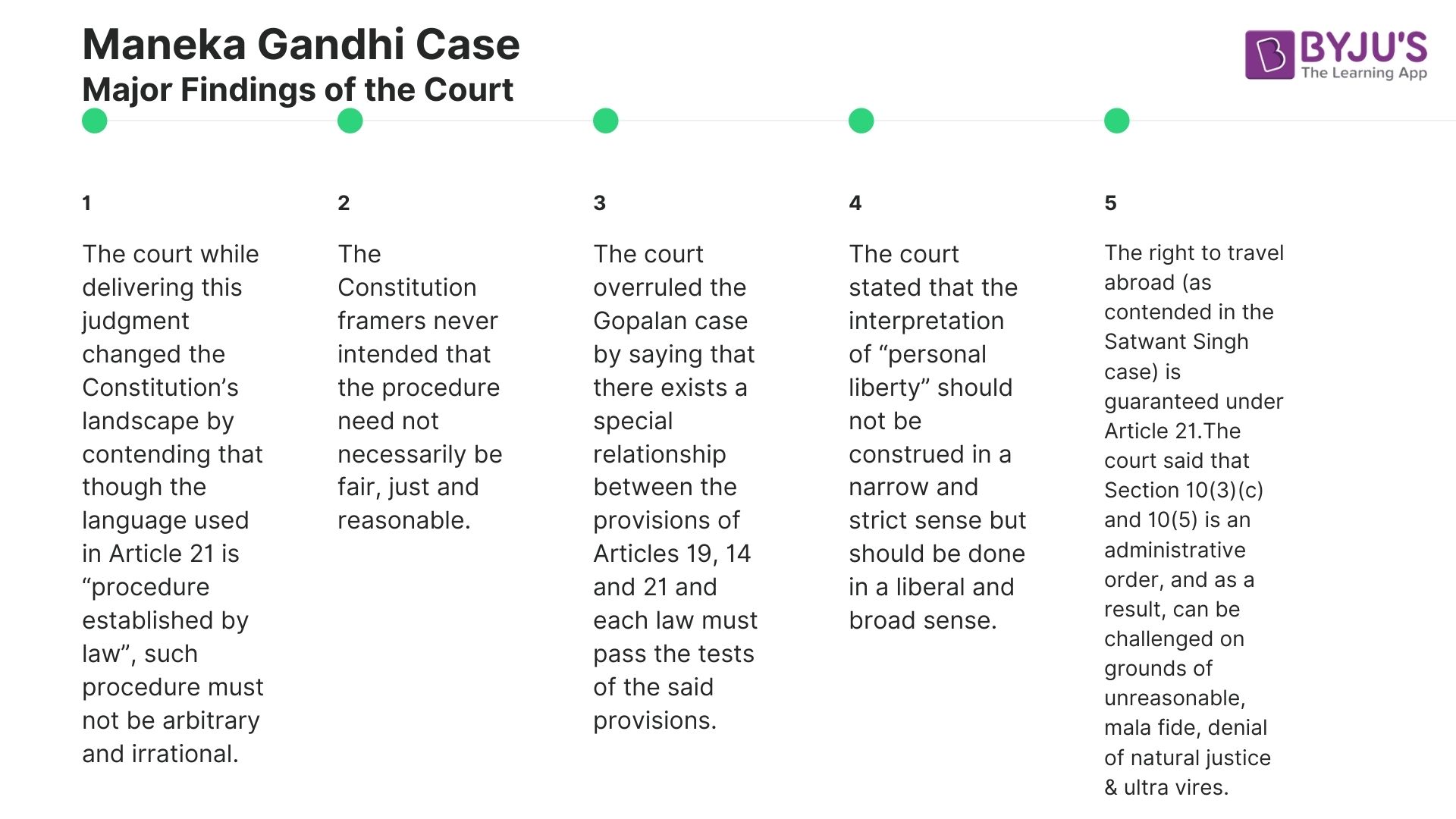 The judgment’s most important feature was the interlinking it laid down between the provisions of Articles 19, 14 and 21. Through this link, the supreme court made these provisions inseparable and into a single entity. Now, any procedure has to meet all the requirements mentioned under these three articles to be held valid. As a result, this judgement enlarged the scope of personal liberty significantly and preserved the fundamental & constitutional right to life.

This judgement, apart from protecting citizens from the unchallenged actions of the Executive, also preserved the sanctity of parliamentary law, when it refused to strike down the 1967 Act’s Sections 10(3)(c) and 10(5).

The judgement paved the way for the Apex Court to bring into the ambit of Article 21 other important rights like Right to Clean Water, Right to clean Air, Right to freedom from Noise Pollution, Standard Education, Speedy Trial, Fair Trial, Right to Livelihood, Legal Aid, Right to Food, Right to Clean Environment, Right to Medical Care,  etc.

Why was the judgement in the Maneka Gandhi case important?

Maneka Gandhi v. Union of India, was a landmark decision of the Supreme Court of India in which the Court significantly expanded the interpretation of Article 21 of the Constitution of India.

What was the significance about the decision made in the Maneka Gandhi case?

The decision had a significant influence on Indian constitutional law and has been described as the moment when the Supreme Court of India rejected “three decades of formalist interpretation, and inaugurated a new path where Courts would expand the rights of individuals against the State, instead of limiting or contracting them.