Armed Forces (Special Powers) Act (AFSPA) is a Parliamentary act that grants special powers to the Indian Armed Forces and the state and paramilitary forces in areas classified as “disturbed areas”. The objective to implement the AFSPA Act is to maintain law and order in disturbed areas. The topic comes under the Indian Polity syllabus for the IAS Exam.

Why is AFSPA in the news?

Key Provisions of the AFSPA Act

The salient features of the AFSPA act are:

Section 3 of AFSPA states that:

Powers Granted to the Security Forces Stationed in Disturbed Areas

Section 4 of the Act states that:

What is the Disturbed Areas Act (DAA)?

How different is DAA from AFSPA?

UPSC aspirants can refer to the video given below, curated by experts for the reference of candidates and a better understanding of the Armed Forces (Special Powers) Act: 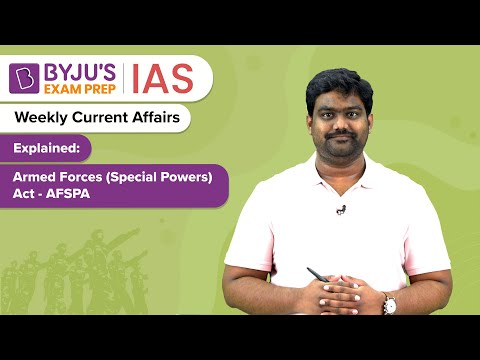 Even during a state of emergency the right to life and liberty- Article 21 and certain rights under article 20 cannot be suspended. But the absolute power given to armed forces dissolves the inherent rights given under the fundamental rights and all the powers are vested in the officers.

In the case of Naga People’s Movement of Human Rights vs. Union of India, the validity of AFSPA was challenged before the Supreme Court and the five-judge bench concluded that the act cannot be considered as violative of the Constitution and the powers conferred under the section 4 and 5 of the Act are not arbitrary and unreasonable and therefore not in violation of the provisions of the Constitution.

Further, the guidelines stated that

The 2016 judgement: Supreme Court’s ruling against the alleged encounter killings carried out under AFSPA came due to the plea submitted by the victim’s family of 1528 encounter killings carried out since 1979 in Manipur. The bench said “It does not matter whether the victim was a common person or a militant or a terrorist, nor does it matter whether the aggressor was a common person or the state. The law is the same for both and is equally applicable to both… This is the requirement of a democracy and the requirement of preservation of the rule of law and the preservation of individual liberties”.

Even though there is a high dose of criticism, there are certain genuine arguments which validate the retention of AFSPA. They are:

Recommendations for the Betterment of the AFSPA Act

Although judicial intervention has done plenty to push for accountability in conflict zones and to refocus the conversation on basic democratic and human rights, progressive rulings by the judiciary can only go so far when they are constantly buffeted by attitudes in the government and the Army that seek to maintain the status quo.

Due to countless human rights violations that have happened over the years, the status quo of the act is no longer an acceptable answer. In the regions where it has been implemented, the AFSPA has become an emblem of tyranny. As a result, the government must address the impacted individuals and assure them that positive action would be taken.

The government should explore imposing and repealing AFSPA on a case-by-case basis, and limit its applicability to a few troubled regions rather than the whole state.

How to approach AFSPA Act for Civil Services Exam